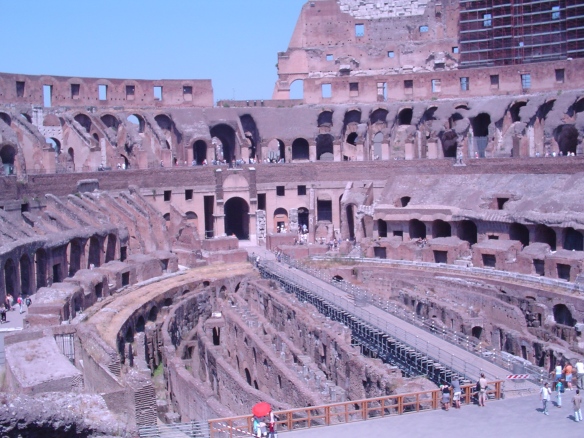 It has now been almost six years since our trip to Italy. I kept a short journal during that trip, which has never been transcribed. What better place to transcribe it than in our family blog? So, over the next few weeks, I will transcribe the journal with appropriate pictures from the trip.

We arrived at the Rome airport early, at about 7:30 a.m. We cleared customs and grabbed a cab to our hotel, which is near the Spanish Steps. Our cab driver was friendly, but spoke very little English. The most remarkable thing about the cab ride was the incredible number of scooters darting in and out of traffic as we came into Rome. Our hotel, the Carriage Hotel, is a charming, traditional Italian hotel wth unique rooms and friendly staff workers. Although the hotel advertises air conditioning, the rooms are still very muggy.

We then walked to the Colisseum after grabbing a bite for breakfast. It was a walk of about a mile in 80+ degree heat. The Colisseum is an extraordinary place. It is much bigger than I expected. It is not hard to imagine how impressive the building must have been in AD 73, just after it was completed. Kish bought a Venus de Milo replica at the Colisseum. The seller came down from 45 Euro to 20 Euro in the blink of an eye.

After the Colisseum, Kish went back to the hotel and the boys and I went to the Forum and the Capitoline Hill. We searched in vain for the Palace of the Vestal Virgins, but did find the arches of Constantine, Titus and Septimus Severus, the Senate, the Rostrum, and the remains of the Temple of Saturn. It is hard not to imagine what it must have been like when Rome was in its glory. It is a beautiful place, and very thought-provoking.

The boys and I then walked back toward the hotel, and stopped for pizza and refreshments. When we got back to the hotel, everyone took a midday siesta. It was about 2 p.m. We awoke at 4 p.m.and headed out for some more walking. We took a short stroll over to the Spanish Steps and had some ice cream at a small cafe. We reversed course and headed back to the Trevi Fountain. It was a magnificent site: an enormous, brilliantly rendered sculpture, a bright blue, sunlit sky, and the quiet murmur of the water from the fountain. It was not too crowded, and a most enjoyable spot for people-watching as we sat on the steps surrounding the fountain.

Kish, the boys and I then walked to the Pantheon. By that time, the sun was beginning to set and many of the streets were in shadow. We encountered our first beggars along the way, including a small, hunched-over woman dressed entirely in black. The Pantheon was another inspiring sight. The dome is enormous, and there is a solemnity and grandeur when you step into the huge structure, with the oculus high above and statuary surrounding you at all points of the compass. It does make you wonder what ancient Rome was like, before its noble facade was stripped away and its monumental architecture was allowed to crumble into ruin.

Our final stop for the day was the Argentinal Sacra, which is a relatively recently unearthed collection of buildings from the Republican era. Our main point of interest was counting the cats that stretched and played down in those ruins. There must have been two dozen cats visible amongst the pillars and stones. It’s hard to say what impressed Russell more — the number of cats or the incredibly small size of some of the Italian automobiles.

Our day ended with dinner at the restaurant next door and a slide show of our digital photography in the boys’ room. Now we need to figure out tomorrow’s itinerary, which I think will include the Vatican. I really can’t believe that I am in Rome, even as I write these words. What an interesting feeling, to walk the paths walked by Caesar and the Roman emperors and to witness more than 2000 years of living history. It makes you realize what a young country America is. I think every American should see Rome, to help put our nation’s current dominance into perspective. I am sure that the Romans of Augustus’ and Vespasian’s days thought the Empire was ever-lasting, and only a few centuries later the dust and debris was accumulating on the floor of the Forum.