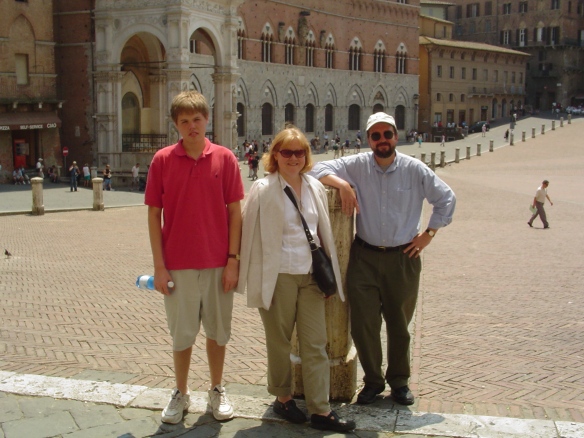 On the main square in Siena

This morning we left Assisi and drove to Siena. Our night’s stay in Assisi was incredibly hot. We even opened the windows completely to try to catch a bit of breeze, but without success. The “air conditioning” unit in the room seemed to only make the air more humid. Neither Kish nor I got much sleep, between the sweltering conditions, the late-night parties in the bars beneath our bedroom window, and the workers who arrived promptly at 6 a.m. to begin working (very loudly) on the building being renovated directly across the street.

Before we left, Russell and I walked up once again to the Castel Ruffino at the top of Assisi. It again offered a striking view of the town and surrounding countryside, but when we got to the summit I was drenched in sweat — and it was only 8 a.m. or so. I have to say I have sweated more on this trip than on any trip I can remember.

We had a light breakfast then hit the road for Siena. The Italian road system continues to impress. The roads are well-paved and well-maintinained, and the destinations are well maked. We had a glitch or two but made it to Siena in time for lunch and a tour around town.

Siena is a very interesting place. It has a large, fan-shaped central square with a tall clock tower, surrounded by medieval buildings. The central square is a very cool place where people sit and chat. Later in the afternoon, a protester on a minibike drove into the square (which is illegal, I think), shouted something I did not understand, then drove off. His performance interrupted the rhythm of the square for only an instant, then everyone returned to their gelato.

The central church here — called, I guess inevitably, the Duomo — is a totally unique place (and I know full well that is a redundant statement.) It is built of black and white, horizontally layered marble. The effect is unlike any church or cathedral I have seen before — more celebratory than solemn. The church also has inlaid marble scenes in the floor, busts of the Popes high up in the rafters, and various statues, fescoes, paintings, and other artwork on the walls. In all, a most interesting place.

After we visited the Duomo Kish returned to the hotel and the boys and I wandered about. We saw the soccer stadium, a kind of pathetic carnival with rides like you would find at the Ohio State Fair, and the Basilica of St. Catherine, one of the patron saints of Italy. St. Catherine’s looks to be badly in need of repair. It’s depressing to see these monumental churches fall into such a sad state, where they lack the parishioners or supporters to even maintain what they have, much less grow and add to their legacy. The boys and I then walked back to the central square, where the kids bought t-shirts.

After a brief respite at the hotel (where I grabbed 40 winks) we headed back to Siena for dinner and a brief sit down on the edge of the town square. I imagine sitting at the edge of the square and chatting has been a primary source of entertainment in Siena for centuries. We saw a family trying — unsuccessfully — to fly a kite, kids kicking a soccer ball, little kids running across the square, a mangy dog getting loose from his master, and other humdrum daily scenes.

In all, Siena made for an intersting day. I think our main hope, however, is that the air conditioning in our hotel works well. I know we all could use a good night’s sleep.