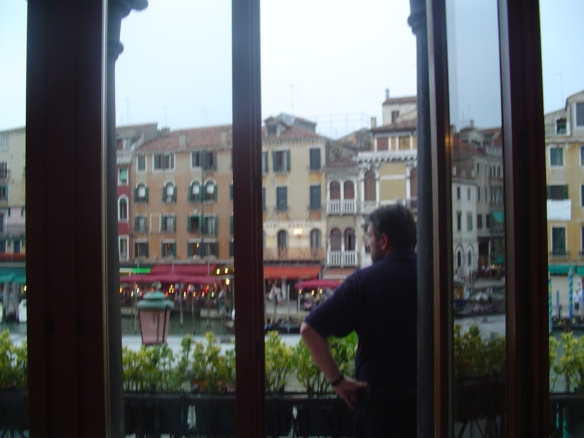 The view from our hotel room in Venice

This day saw us travel from Florence to Venice and take our longest car ride yet. We left Florence at about 10 a.m. The drive out of Florence was not an easy one — we got caught in a bit of a traffic tie-up and had to navigate several traffic circles on our way out of town. I think it is fair to say that Italian drivers are aggressive, and the presence of the ubiquitous motor scooters makes even simple maneuvers more complicated, as the scooters dart in and out. I much prefer driving in the Italian countryside.

Once we got out of Florence onto the Autostrade, it became an easier trip. We stopped almost immediately for food and gas, and it was quite an experience. The Italian roadside stops are not at all like an American fast food outlet and gas station. Kish and the boys loaded up on some Italian junk food — Russell finally got to try the “Happy Hippo” candy he had seen on TV — but what was really amazing was the quantity and quality of food and alcohol choices that are available. The place we stopped at had a large sandwich area and bar, plus a restaurant where you could select pasta dishes or salads, or ask them to grill fresh meats. We got sandwiches and had our lunch, and all around us people were loading up on wine and beer. What a change from the prevailing views in the USA!

From Florence to Bologna our ride was hilly, with lots of tunnels and switchbacks. The variety of vehicles on the Autostrade is amazing, including all manner of trucks and delivery vans, high-powered German cars, and grossly underpowered, flimsy little cars that struggle up the inclines. Our Opel seems to stack up nicely. From Bologna to Padua the road flattened out, and there was no apparent speed limit. On the straightaways my top speed got up to about 160 kmh, which is probably around 100 mph. We made it to Venice in good time.

At Venice, we faced on of those tourist/cultural decisions that makes these trips interesting. As we parked in the garage, an attendant came up and told us that we would need to leave our car unlocked with our keys inside. We initially agreed and started to walk away, but obviously felt a lot of trepidation about leaving the car unlocked. So, we asked if there was a place where we could park the car and lock it, were directed to a stop six stories higher, and ended up parking there — with a lot more comfort now that our car was locked and the keys kept securely in my pocket.

We then negotiated a ride on a waterbus into Venice, which takes a bit of persistence. The ride into Venice was crowded and stuffy, but we got off at only the third stop, so the ride wasn’t too bad. Our hotel is a charming place immediately adjacent to the Rialto Bridge. It was about 10 yards from the waterbus stop. When we got to our room, we discovered that it had a balcony that looked directly out over the aptly named Grand Canal. What a view!

We promptly walked out into Venice. The concierge gave us a “map,” but it is wholly inadequate other than indicating general directions. My guess is that the map did not have the names of more than 90% of the “streets.” Fortunately, most of the streets show the way to two of the big designations. In our part of the city, the two locations are the Rialto Bridge and the Piazza San Marco. We walked to the Piazza San Marco and found it without too much trouble. It is an impressive, strikingly large square with the Basilica San Marco at one end and large municipal buildings on the other sides. On one side of he Basilica is the Palace of the Doge and a view of the islands off into the distance. It was a hot day, so we decided to skip the Basilica, where there was a long line, and save it for tomorrow.

Kish wanted to see the Guggenheim Museum, so we headed toward the Accademia — another one of the signpost destinations — and found the Guggenheim after a bit of wandering. It is a fine collection of modern art, with Picassos, Pollocks, and other assorted cubists, abstractionists, et al. Many of the works seemed to be from the artists before they hit their peak — such as Pollocks from his cubist-type period. Not all of the pieces worked for me, but the color and form of the artwork made a refreshing change from all of the religious icons and “annunciation”-type paintings we have seen on this trip.

The Guggenheim just about did us in, so we headed back to the hotel. We enjoyed the view from our balcony, then did some exploring to try to find a restaurant. We ended up at a place at the foot of the Rialto Bridge. A bit touristy, and therefore more expensive, but the view was very nice and the food was good. As we ate the wind picked up, but the rain held off. After dinner we took a stroll and found that, at the Piazza San Marco, the restaurants ringing the piazza hire musical groups to serenade the diners. We walked past to the sounds of Mozart, Beethoven, and the Godfather theme.

The night also seems to be a prime time for gondola rides. Many of the gondolas were booked, and it was entertaining to watch some of the more obese travelers struggle to get into the gondolas. I have to say that I have not one bit of interest in taking a gondola ride, but it was pleasant watching the boats glide past.

Kish and I watched some Italian TV before turning in. TV seems to be the same the world over — Hollywood movies, infomercials, game shows, and mindless cop dramas. In Florence, I had seen Popeye cartoons dubbed in Italian, which indicates how desperate the Italian networks are for product. 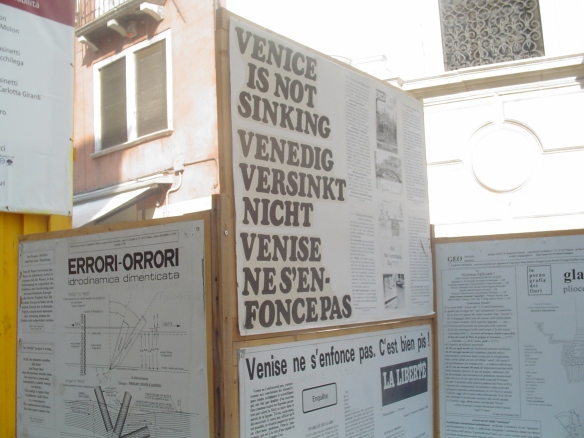