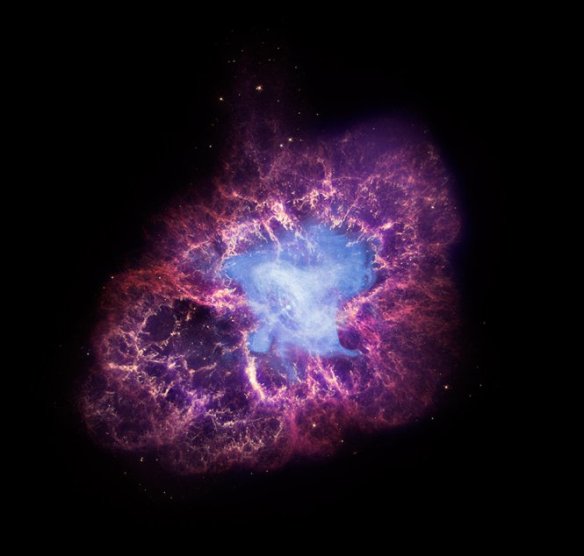 If you like science and space, you can do worse than regularly visit the NASA website, just to see the latest information and images posted there.  Recently they put up a very interesting depiction of the Crab Nebula, based on combining the Chandra X-ray image (shown in blue), the Hubble Space Telescope optical image (shown in yellow and red) and the Spitzer Space Telescope infrared image (shown in purple).  The result is the striking image shown above.

The Crab Nebula is the remnant of a supernova that was first observed in 1054 A.D. and was recorded and marveled at by humans across the world.  When the light from the explosion first reached Earth (of course, the explosion itself had happened long before) it was so bright it could be seen in broad daylight.  In the center of the nebula is now a neutron star, and if you look carefully at the image you see a fascinating, roiling cauldron of gases and gravitational phenomena surrounding the star.  It is no wonder that the Crab Nebula is one of the most studied celestrial items.