When I travel, I’m a creature of habit.  Kish reminds me of it, and I freely admit it.  When I visit New York City and have business in midtown, I like to stay at the Waldorf-Astoria.  Why not?  It is a classic art deco icon, centrally and conveniently located on Park Avenue, beautifully appointed, with a friendly and courteous staff and great amenities.  It’s one of the few hotels in the world that everyone has heard of. 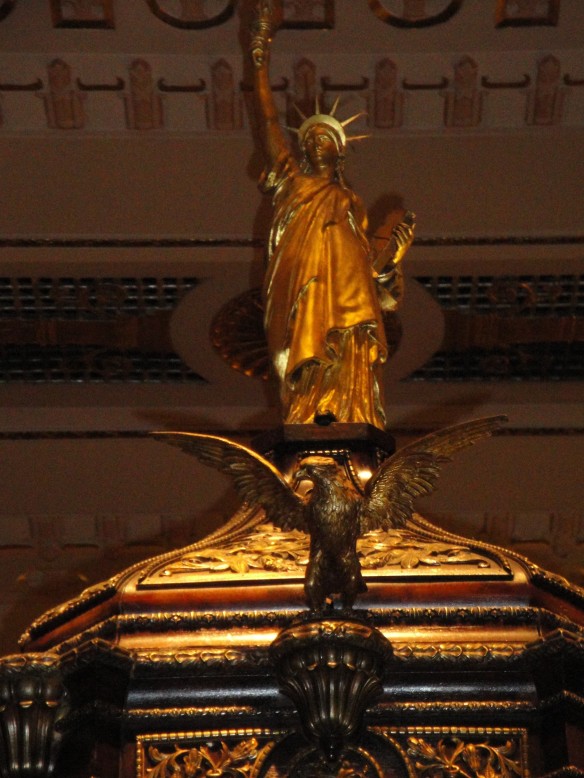 The Statue of Liberty atop the clock

Tonight I sat in the lobby, waiting for Russell to appear for dinner.  If you want to get a sense of the glory days of the American Republic, when the young, vigorous, growing country could afford lavish and gilded hotels for prosperous capitalists, you can do worse than spend some time in the magnificent Waldorf lobby and look around for a few minutes.

Sit in the comfortable chairs, take in the finely crafted ceiling tiles, admire the brass screen above the hallway to one bank of elevators, gape at the extraordinary golden clock at the lobby’s center, and enjoy some people-watching at the well-dressed and exotic visitors strolling through.  There are few better venues, even in a city as exciting as New York City.

A screen in the Waldorf lobby

And because I am a creature of habit, when I stay at the Waldorf I like to eat at the nearby Italian restaurant called San Martin.  It is less than a block away, on one of the side streets where so many fine New York restaurants are found.  It has remained unchanged for the 20-plus years I have been visiting New York City and, I think, has employed the same maitre d’ and waiters for much of that time.

I drink some good wine, have prosciutto and parmesan cheese for an appetizer, savor excellent, homemade spaghetti and meatballs, and cap off the meal with a good cup of black coffee.

All of this familiar activity makes the Big Apple a bit more homey and welcoming for a regular visitor.  It’s why I come back to the Waldorf and San Martin, again and again.

1 thought on “Hanging Out At The Waldorf”