The next morning we left Deadwood, drove west, and crossed the state line into Wyoming.  Our initial goal was Devil’s Tower.  It is another iconic location in the American West, made even more so by being featured so prominently in Close Encounters of the Third Kind.  It is also out in the middle of nowhere, and it takes some time to get there, even driving at “western speeds.”

The long drive to Devil’s Tower is worth it, because the sight of the Tower is so striking.  It sits by itself in the rolling countryside, like a colossal tree stump that has been vertically clawed by a gigantic bear or a landing spot for the chariots of the gods.  It is visible for miles as you approach, looming larger and larger in the windshield.  When you finally reach the base of Devil’s Tower the impact is overwhelming.  The massive, grooved rock overhead, guarded by the rubble of huge stones that have slid off the rockface, has an almost physical presence.

Richard and Russell immediately began scrambling up the rocks surrounding Devil’s Tower, heading up to an area on the monument itself.  There are no fences to keep people away, just a sign that advises that climbers will proceed at their own risk.  No kidding!  Kish and I half expected to see bodies cartwheeling down the rocks after a misstep.  Fortunately, that didn’t happen, and the kids were, I think, exhilarated by their climb.  As they scrabbled up the rocky base of Devil’s Tower, Kish and I explored the surrounding area, which was interesting in itself.  The Tower is sacred to native Americans, some of whom had left little message bundles tied to the trees at the bottom of the Tower.  As the breeze moved through the trees dotted with the colorful bundles, my thoughts turned to what tribal life was like in the shadow of the Tower, long ago. 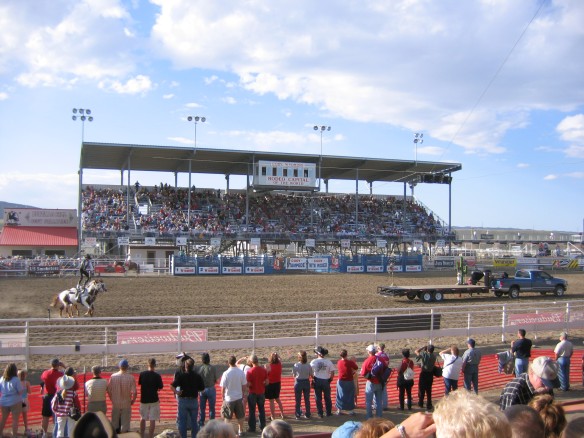 The view from our seats at the Cody Rodeo

After leaving the Tower and getting back onto the interstate we headed to our farthest western destination, Cody, Wyoming.  The idea was to see a true western town and a true western rodeo.  Cody filled the bill admirably on both counts.  After checking into a somewhat lame hotel just outside of town, we drove back to Cody, walked around the well-preserved downtown area, had dinner at an Italian restaurant, and then drove out to the Cody night rodeo.  What a great scene!  You sit in bleachers, drinking beer and watching some of the best rodeo found anywhere, complete with roping exhibitions, trick riding, bronco busting, calf wresting, and rodeo clowns. The smell of leather, dust, and animal sweat is in the air, the athleticism and skill is extraordinary, and testosterone levels are through the roof.

My sense is that many people drive by Cody, on their way to nearby Yellowstone Park, without giving a second thought to stopping.  In my book they are missing something.