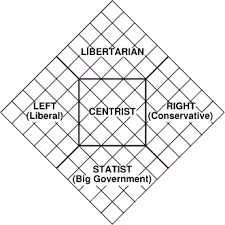 Many of the blogs posted on our website are political in nature. Last week I was watching Glenn Beck and I heard him talking about something called the Nolan Chart Survey, which lists ten thought provoking issues each with four choices representing different points of view. After answering the survey a person can click on the button at the bottom of the survey to find out where one falls on the chart.

The chart shown above then places an individual somewhere on the chart as a Libertarian, Liberal, Conservative, Centrist or a Statist. I guess it didn’t much surprise me when I completed the survey, pressed the button and found out I was a centrist.

There was an article posted on the site titled what it is to be a centrist.  I particularly liked one of the comments made by the writer that a centrist is continuously reconsidering, rexamining or revisiting one’s viewpoint. Yep, that’s me !

I have read Richard’s blog where he has mentioned that he is a liberal, but when he takes the survey will it bear him out ? I think I know where brother Bob falls on the chart, but I challenge him to take the survey so we can find out for sure. Where does my nephew Russell land on the chart and how about my sister in law Kish ?

So have fun taking the test and finding out who you are I did !

The Association of Community Organizations for Reform Now — better known as ACORN — has agreed to give up its license to conduct business in Ohio and to not return to the state under another name.  The agreement was part of an otherwise confidential settlement that resolved a civil lawsuit brought by an Ohio group that contested ACORN’s voter registration practices.  The AP story on the deal is here.

ACORN’s spokesman, quoted in the linked article, downplays the significance of the agreement, saying that ACORN was winding up its operations in Ohio anyway and it therefore made no sense to spend money defending the lawsuit, which ACORN contends was baseless and brought merely for harassment purposes.  That may well be the case, but it raises the question of why ACORN would be winding up its operations in Ohio with some significant statewide elections fast approaching.  You would think that, given Ohio’s difficult economic and employment outlook, Ohio would now be fertile ground for ACORN’s advocacy.  The fact that ACORN is leaving the state, for whatever reason, says a lot about much the climate has changed since 2007 and 2008, when ACORN was flying high and community organizers were viewed with much more favor.

How far ACORN has fallen since those days!

According to this posting on the Vassar website, the men’s rugby team lost in their first match with an Irish team.  I don’t know enough about rugby or its scoring system to figure out how close the contest really was, but it appears that Russell was put into the game after Vassar’s captain was injured.

The report does not describe post-game festivities, but I understand from Russell that the team members were expected to learn songs about America — like Woody Guthrie’s This Land Is Your Land — to sing to their Irish opponents during the after-match libations.  Let’s hope the Vassar lads were in good voice.