Florida Governor Charlie Crist, who went from having a commanding lead in the polls to getting clobbered in the Republican primary contest for the U.S. Senate seat from the Sunshine State, has announced that he will run as an independent.  Of course, the fact that Crist was likely to get walloped in the primary wasn’t the motivating factor.  Rather, it was about “principle.”  In his statement announcing the decision, Crist said that, for him, it is all about “public service” and “putting the needs of people first.” Seriously, he said that — and apparently was able to get it out with a straight face, without dissolving into uncontrollable laughter about the obvious absurdity of his self-serving statement. 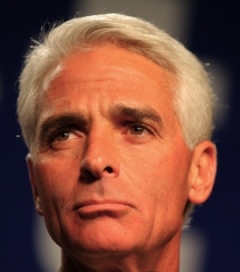 There is nothing surprising about this, of course.  Indeed, everything about the story is predictable.  Crist’s decision was not a difficult call because, as any rational person knows, every politician is just about getting himself or herself elected and then reelected.  When you have the itch to be in The World’s Greatest Deliberative Body, party affiliation doesn’t mean squat.  Arlen Specter showed that recently, and Crist confirms it.  Also predictable is the reaction to Crist’s announcement.  Republicans are outraged that Crist — that unprincipled hack! — would shed his party affiliation so casually.  Do you think they were outraged when Joe Lieberman decided to run as an independent in a bid — and a successful one at that — to keep his Senate seat, or when Congressman Parker Griffith from Alabama recently changed his allegiance from Democrat to Republican?

If I were a Florida voter, I wouldn’t vote for Crist — not because he has jettisoned his party affiliation, but because his change has exposed the naked truth.  What does Charlie Crist believe in?  Why, he believes in nothing other than Charlie Crist.  He’s now established that his interests come before everything else.  Why would you want someone like that to represent your State in the Senate?