The brick steps by the New Albany library

In my walks around New Albany recently I’ve noticed an unexpected yet consistent phenomenon — brick steps that are falling apart.  You walk past a nice home, you see the entrance blocked off with that bright yellow “crime scene” tape, and then you notice that the brick steps are crumbling into disrepair.  The most pronounced example of this phenomenon can now be found near the New Albany library and town center, where some wide brick steps have been completely blocked off by orange plastic netting because they are unsafe.  It appears that the mortar between the bricks has almost been pulverized — and when the mortar loosens and one brick falls out of the design, the rest of the bricks are quick to follow suit. 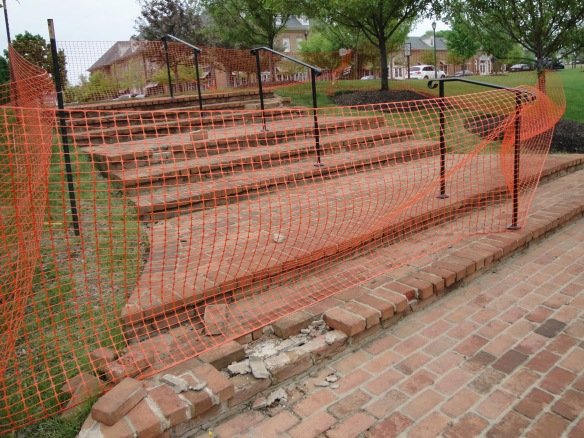 Another view of the New Albany steps

What gives?  I understand that using brick for steps puts special stress on the brickwork, because the weight and pressure is more likely be to focused on the part of the brick at the edge of the step.  Still, the brick steps near town center are only a few years old, as are most of the steps into New Albany homes.  Was the mortar that was used cheap, poorly prepared, or somehow ill-suited to bearing up under the strain applied by the weight of the human foot?

The architecture of ancient Rome used a lot of brick, and those structures seem to be doing just fine.  You don’t expect brick steps to fall apart after a few years.  Instead, when you make something with brick, you expect it to have more permanence and staying power.  Just ask the Big Bad Wolf.