The next stop on our tour of public art on the Statehouse grounds is the Peace statue, which is on the north side of the Statehouse grounds, directly across Broad Street from the Rhodes Tower.  The Peace statute was erected by the Womans Relief Corps, Department of Ohio, in 1923.  It commemorates the “heroic sacrifices of Ohio’s soldiers of the Civil War 19861-1865 and the loyal women of that period.” 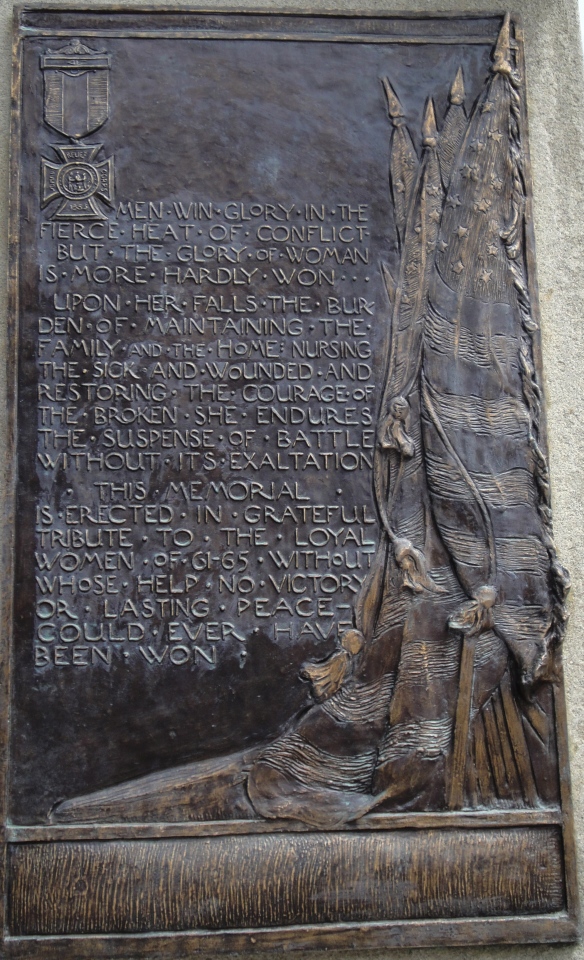 The women's plaque on the rear of the Peace statue

The figure of Peace takes the traditional form.  It was the work of Bruce Wilder Saville, who happened to be a faculty member at Ohio State.  The rear of the statue is somewhat less traditional, and a bit more interesting.  It features two metal plaques — one commemorating the sacrifices of the more than 300,000 men of Ohio who fought valiantly in the Civil War, and the other recognizing, in heartfelt terms, the glory of the women who supported the war effort.  To my mind, the plaque describing the crucial role of women in the Civil War is especially powerful and moving.

Equally poignant, in the middle of the rear of the Peace statute is the simple statement:  “Let us have Peace.”