At the intersection of walkways at the southwest corner of the Statehouse is the Christopher Columbus Discovery Plaza, which features a rendering of the intrepid explorer, and the capital city’s namesake, atop a granite base and fountain. 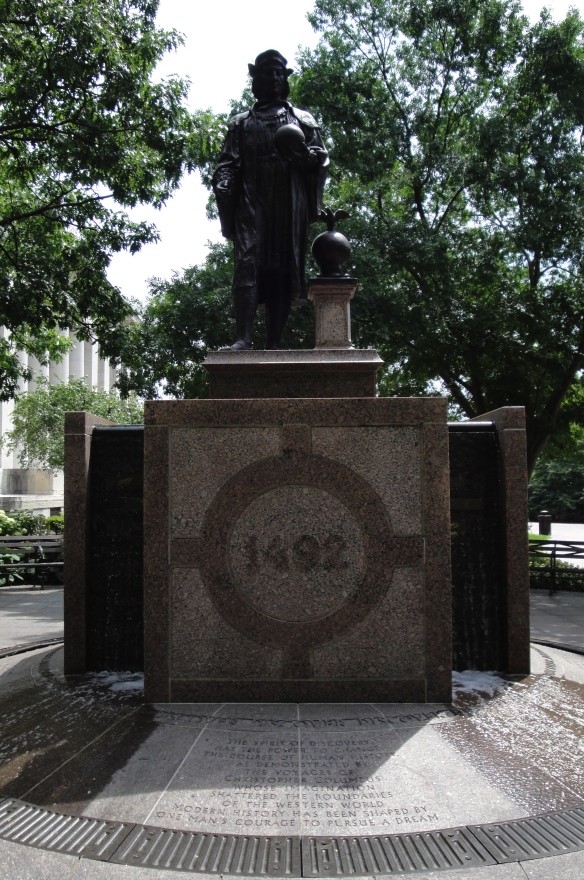 The Christopher Columbus Discovery Plaza came together gradually.  The hollow copper statue of Columbus was created first and initially was found on the old campus of the Pontifical College Josephinium.  It was donated to the state in 1932 and erected on the Statehouse grounds at that time.  In 1992, as part of the 500th anniversary of Columbus’ voyage, the granite base and fountain were constructed.  In front of Columbus appears the statement:  “The spirit of discovery has the power to change the course of human history, as demonstrated by the voyages of Christopher Columbus, whose imagination shattered the boundaries of the western world.  Modern history has been shaped by one man’s courage to pursue a dream.”

Statues of Columbus all seems to look the same, with old Chris looking down on a sphere, usually with a frown on his face and some seafaring instruments nearby.  The Statehouse statue is along the same lines.  It doesn’t make Columbus seem like the kind of person with whom you’d like to share a long sea voyage.