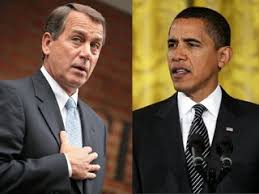 It’s pretty clear that Bob is not happy with President Obama’s agenda and what the Democrats are trying to push through Congress, so my question to Bob is what is a voter to do ?

Since voters in most area’s of our country typically only have one alternative, Bob’s response would most likely be to vote Republican. With the mid-term elections coming up in approximately three months I decided to start doing some research and in the process of doing so I stumbled across this article titled, “What Will a Republican Majority Do Next”.

The article mentions four things that the Republican majority might do, none of which I am in favor of.

Shut down the Government – This has happened before as the article states back in 1995 and from what I recall it was a huge mess because government employees had to be furloughed and alot of wages were lost. Besides I wonder what a government shutdown would do to such a fragile economy, would it push us into a double dip ?

Propose Massive Budget Cuts – I would be interested to know where these massive cuts are going to come from. Typically Republicans are in favor of strong National Security so that means continuing to fund the two wars we are currently fighting. What usually happens is services the government currently provides to the poor and needy end up getting cut and the people who need help the most end up getting the shaft.

Begin Proceedings Leading Toward the Impeachment of President Obama – Please, I don’t want to go there again. When the Republicans tried to impeach Clinton I felt like it was a whole lot of hoopla over a huge mistake in judgement on his part. I firmly believe Obama has done nothing dishonest and don’t want our country to be put through another charade like that one.

Repeal the Health – Reform Bill – Having worked in the health insurance industry for most of my adult life, I think the bill while not perfect has alot of good things in it. The article mentions the elimination of pre-existing conditions, but I like the idea of giving parents an option of keeping their dependent children on their insurance plans until age 27.

So if a voter does vote for a Republican and they do get the majority, this article mentions the “Roadmap for America’s Future“, created by Paul Ryan as one of only a few suggested agenda items put forth by Republicans.

I took a look at some of Ryan’s recommendations and for Medicare and Social Security people age 55 and older are grandfathered in under the current system.

Hmmmm …… being age 54 and about to be age 55 next June I wonder which way I am going to vote in November.