Last night the CBS Evening News tied its all-time low for viewers in a week.  Only 4.89 million viewers tuned in.  For that same week, about 19 million Americans — only a miniscule fraction of our total estimated population of 309 million — watched one of the three network nightly news shows. 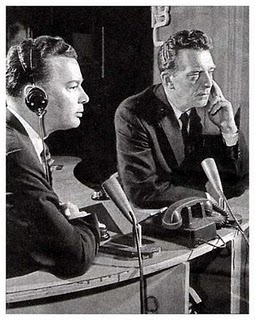 This is a far cry from 1969, when Huntley & Brinkley and Walter Cronkite ruled the airwaves and half of all American households watched one of the three network news shows.   In 1980, 55 million Americans watched the evening news, and as late as 1993 more than 40 million Americans watched nightly newscasts. In short, in 17 years, as the population of the United States has grown, nightly news viewership has been cut by more than half.

Why?  I’m sure that having more viewing options, the ability to get news at any time through the internet or 24-hour cable news, and longer work days that make it harder to be home and in front of the set at 6:30, all have had an impact.  No doubt the identity of the anchors also is relevant; Katie Couric just doesn’t have the same gravitas as Walter Cronkite.  And perhaps Americans don’t really feel like the “news” reported by the networks is all that compelling any more, given the prevalence of “for your health” segments and other lifestyle pieces and concerns from some corners about biased reporting.

Although the causes of this phenomenon may be debatable, the consequences are not.  Whereas nightly news anchors used to have tremendous influence because they had tremendous audiences, that is no longer the case.  Political campaigns used to focus on getting shown on the nightly news because even a few moments of footage would define the public’s perception.  Now, if the NBC Nightly News decides not to cover a politician’s comments, that politician can count on getting the message out through friendly talking heads on Fox, CNN, or MSNBC, or through blogs or Youtube.  Events are no longer seen through one lens or defined by one report.  That is bad news for the networks, but it is probably good for democracy that a few people no longer have a chokehold on the images presented to Americans over their dinners.

Every once in a while a news story announces the results of a study and the results are so outlandish, and so contrary to normal human experience, that you wonder whether there was some problem with how the study was designed or conducted.  So it is with a new study, funded by the vision care division of Johnson & Johnson, that finds that kids between 6 and 11 who wear contact lens have better self-perception than kids who wear glasses.  The study, led by a doctor from The Ohio State University College of Optometry, somehow found that kids who use contacts were more satisfied with their appearance and their ability to participate in sports and other events.

Huh?  Does anyone really believe that kids who wear glasses aren’t the envy of every other kid in the neighborhood?  We all know that people associate glasses with innate studliness and a carefree, devil-may-care charm.  And how could kids with contacts have more self-confidence when it comes to athletic events?  After all, who wouldn’t want to play contact sports wearing flimsy glass and plastic devices that will be broken into smithereens by even an indirect hit?  Another obvious advantage to glasses is that boys can advertise their manliness by wearing spectacles that are held together by scotch tape at the bridge of the nose or the corner of the frame, thereby transmitting a powerful subliminal message to all that the glasses were broken in some ultra-masculine pursuit.  And who wouldn’t want to develop the fine motor skills needed to try to replace the tiny screws that hold eyeglass frames together?  What right-thinking kid would want to turn down the chance to display the rakish bonhomie seen whenever a kid comes inside on a frigid day wearing glasses that immediately became hopelessly befogged?  In short, why would anyone want to look like a normal person rather than some goggle-eyed freak?

You really have to wonder about these studies sometimes.