One of the more interesting congressional races in the nation is happening in Columbus, in Ohio’s 15th District.  Democrat Mary Jo Kilroy narrowly defeated Republican Steve Stivers in 2008 — she won by 2,311 votes out of 304,000 cast — and the two are squaring off again this year.  If there is going to be an electoral tidal wave that lifts the Republicans to a majority in the House of Representatives, as some are predicting, then Republicans are going to have to win in districts like the 15th. Perhaps for that reason, the contest seems to be getting a fair amount of national attention.

The conventional wisdom is that the Republican candidate has the edge — although the polling data on the race is limited and pretty dated.  That may in fact be the reality, but I’m not so sure.  The district has changed a lot since my old boss, Republican Chalmers Wylie, routinely won big majorities and coasted to reelection.  The 15th district now includes parts of Columbus, the areas south and west of downtown, the northwest suburbs, Marysville, which is home to The Scotts Miracle-Gro Company and Honda of America Mfg., Inc., and various rural areas.  The white-collar suburbs like Upper Arlington and Worthington, reliably Republican in years past, have become much more politically diverse and unpredictable in the past decade.  The areas south and west of downtown, on the other hand, has been very hard hit by the recession.  Who knows how these areas will react to the current economic and political climate?

The race also is interesting because Kilroy doesn’t seem to be running away from her liberal voting record.  As a freshman member of the House, Kilroy was a consistent supporter of the “health care reform” legislation and other key Democratic policy initiatives (for which UJ is thankful).  She always refers to Stivers as a “long-time bank lobbyist.”  Stivers, on the other hand, seems to be staking out more of a centrist position.  For example, he talks about “fixing” the “heatlh care reform” legislation rather than repealing it outright.  He criticizes Kilroy for killing jobs and being out of step with the views of the district.

Moving to the center normally is good politics, and the 15th District will be a good test on whether that remains the case in 2010.  In many recent primaries, voters have rejected the more centrist candidates in favor of those who are voicing more pointed positions on the issues.  This may not be an election where voters have an appetite for middle-of-the-road responses to very serious problems.  If that is the national mood, then Kilroy’s two-fisted defense of her liberal voting record (she received a perfect 100% rating from Americans for Democratic Action in 2009) may strike a responsive chord with the electorate.  On the other hand, if the voters are fed up with federal spending that has massively increased the federal debt and legislative initiatives that haven’t made a dent in unemployment, then Kilroy’s defense of her liberal record will effectively be making Stiver’s case for his own election.  Either way, the 15th District will be one of the bellwether contests to watch on Election Night.

Those of us who work in a white-collar office inevitably accumulate office paraphernalia.  We are allocated a cubicle, an office, or some other bland, generic space, and we bring in photos, artwork, and other items to personalize the otherwise depersonalized spaces.  And we end up forming attachments to some of those items — so much so that we cannot imagine what it would be like to be at work without them nearby. 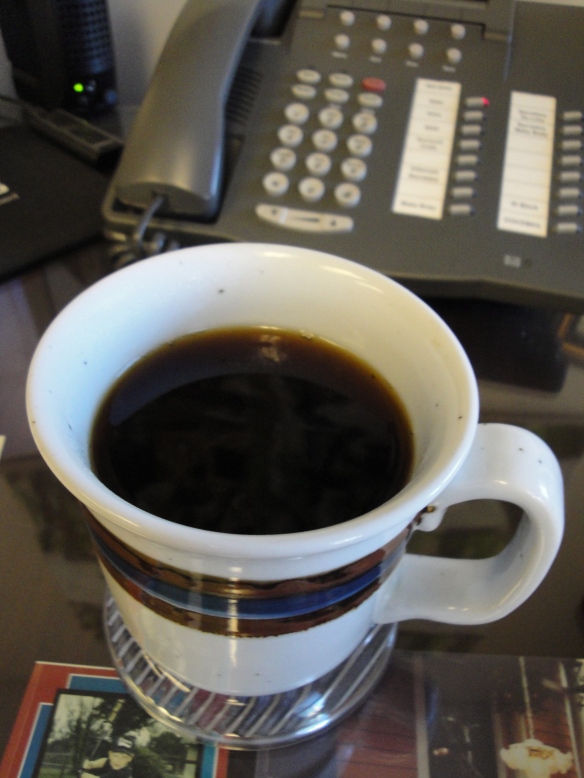 So it is with my coffee mug.  It is a piece of light grey stoneware, with bold blue and brown horizontal stripes.  The stamp on the bottom says “Lauffer Handcrafted Stoneware Ovenproof Japan.”

I’ve had this same mug for 28 years.  It has faithfully accompanied me as I have studied for law school classes, worked on the Georgetown Law Journal, been a summer associate at two different law firms, clerked for a federal judge, and now worked at the firm for 24 years.  Jane Tucker, our former downstairs neighbor at 1019 East Capitol Street in Washington, D.C., got me the mug as a good-luck-in-law-school present in the summer of 1982.  It is a perfect office coffee cup — sturdy enough to stand some jostling and big enough to eliminate the need for constant coffee runs, with an ample surface area that allows the coffee to cool as I drink another slug.  The glazing makes it easy to clean off most, and I emphasize most, of the accumulated coffee crud each morning.  I appreciate its exquisite weight, and it feels good in my hand as I take the morning slurps.  I can’t imagine working without it.