Has anyone else noticed the recent advances in hotel shower technology?  Unfortunately, they don’t involve shower nozzle height; there are still too many hotel showers that apparently were configured for the Mayor of the Munchkin City.  They also don’t address the issue of achieving water pressure beyond a limp trickle or the development of knobs that can be easily manipulated by the sleepy traveler to produce water that is comfortably between tepid and scalding. 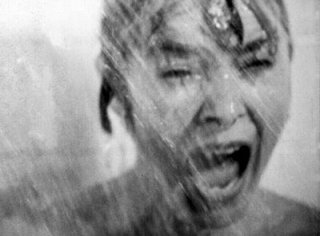 No, the developments I’ve seen involve bowed-out shower rods that make the interior of the shower seem larger and the addition of partially or fully transparent shower curtains.

What is the reason for these developments?  Obviously, they are a delayed response to the deep trauma that watching Psycho has inflicted on us all.  Hotels have finally realized that every lathered traveler in a hotel shower fears that they are moments away from being chopped to bits by Tony Perkins and watching their blood and gore swirl down a black and white drain.  Both of the new hotel shower developments address these core concerns.  The transparent shower curtain allows for early detection of the crazed guy wearing his dead mother’s dress, and the bowed-out shower curtain affords the extra room needed to dodge the downward knife thrusts.  After all, a man wearing a heavy black floor-length dress is bound to be restricted in his movement, and the additional in-shower space should give the nimble traveler the opportunity to conduct meaningful evasive maneuvers.

Kudos to the hospitality industry for recognizing, even if belatedly, the profound anxieties of the American traveler and taking appropriate steps to address them!