After losing at Wisconsin last Saturday night and falling to number 10 in the polls, the Buckeyes came roaring back yesterday.  On a fine fall day in Columbus, overcast and perfect for college football, they trounced Purdue, 49-0.  The score really isn’t reflective of how one-sided the game was. 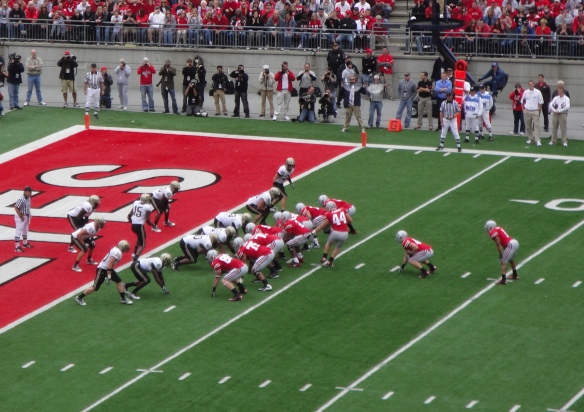 Ohio State led 42-0 at halftime and racked up more than 400 yards of offense in the first half.  They ran the ball pretty much at will, Boom Herron lived up to his name as he blasted through Purdue for two scores, and Terrelle Pryor threw for three additional touchdowns.  The defense, after getting gashed by Wisconsin’s running attack, totally shut down the Boilermakers very banged-up offense.  In the second half the Buckeyes coasted (a bit of a concern to the Buckeye Nation, which knows that you don’t want to get sloppy).

Up next is Minnesota, where the Buckeyes will play their third Saturday night game of the year against a Golden Gophers team that has struggled all year and recently fired its coach.