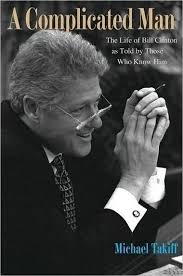 I highly recommend A Complicated Man written by Michael Takiff. It just came out so picked it up at the library and read it in a couple of days, in fact I could hardly put it down it was that good. I really loved the book and the way Takiff inserted the perspective and testimony of over one hundred and seventy individuals he interviewed for the book which tracked Bill Clinton’s life from his birth to present day.

The book gave me some insight into Clinton the person, not just as president and he sounds like he would be a fun person to hang out with. He seems to be a warm person who is very compassionate and loves chatting with the average person. A member of his staff mentioned that he and Clinton were staying in a hotel and Bill struck up a conversation with one of the hotel maids who was an immigrant. Hard to imagine our president doing that !

Another staff member recalled a time on Air Force One when Clinton was doing the crossword puzzle while playing hearts with his staff. They were all watching the movie Dumb and Dumber and Bill was constantly asking about the plot and yucking it up with the people he worked for him.

Some of Clinton’s best qualities while president were that he was highly intelligent, could grasp details of a sitation quickly, extremely flexible and showed the capacity to grow and change as his presidency progressed. This was best shown after the 1994 mid-term elections when the Republicans picked up 54 seats in the House and eight seats in the Senate to take over both branches of the legislature. So Bill decided to adopt the Republican’s goal of a balanced budget with his own modifications even though his party was not happy about it.

If you are a political junkie this is the book for you, check it out, I hope you like it as much as I did.