New Albany is one of those suburbs that sprang up quickly in the 1990s, taking the area from rural to developed in a few short years.  The town planners left many wooded areas that separate the various developments and give the area a semi-rural feel that ties in well with New Albany’s signature white fences.  One price of the semi-wooded nature of the area, however, is lots of road kill.  Animals cross the roads to get from wooded area to wooded area, and sometimes some of them don’t make it. 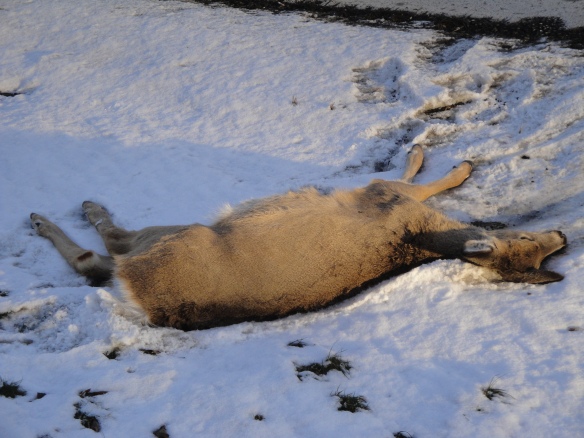 Last weekend on our morning walk Penny and I were saddened to find two carcasses along Route 62 that were the result of car-deer accidents.  They were close together and probably were members of the same deer herd.  For all I know, they may have been plowed down by the same driver.  Route 62 is especially fertile ground for road kill; it is a winding road with a 45 mph speed limit where cars can round a bend and come upon deer unexpectedly.

Car-deer accidents are common in rural and semi-rural Ohio.  Car insurance claim statistics indicate that Ohio ranks in the top five of all states in the number of reported car-deer accidents.  Such accidents are costly on many levels.  Deer are not insubstantial creatures, and hitting one can cause significant damage to the car and, in some instances, can precipitate even more serious accidents with other cars on the highway.  If the deer rolls up the hood and through the windshield, the driver and passengers can be seriously injured or killed.  Towns need to pay someone to remove the road kill.  (In New Albany, that unhappy chore is the job of the Public Service Department.)  And any car-deer accident leaves the driver shaken and upset.  No drivers want to strike and kill innocent animals who are simply crossing the road in search of food or other members of their herd.