Today Richard and I planned to eat every meal outdoors.  However, our plans were complicated by the fact that today is Sunday, as well as May Day.  Many businesses were closed, which threw a bit of a wrench into our plans. 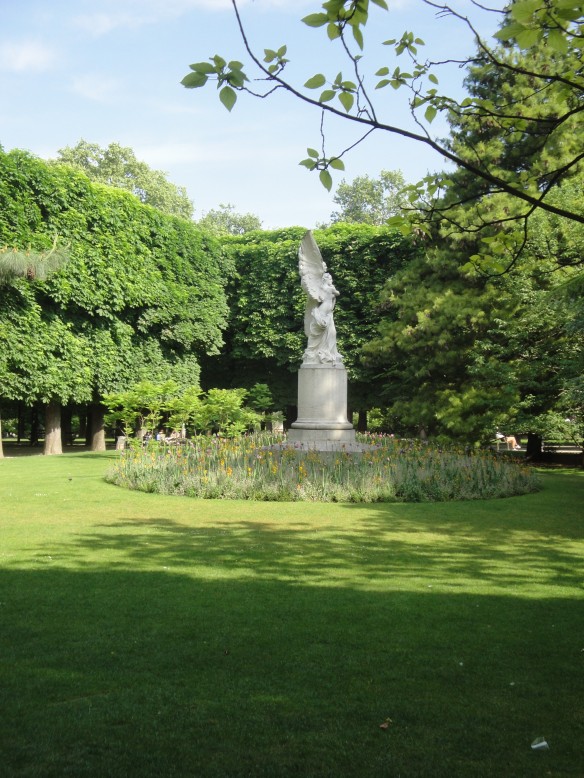 The view from our park bench

After waking up we walked over to the Luxembourg Gardens (Jardin du Luxembourg), which are very close by our apartment.  Across the street we found a fine patisserie and bought the makings of our breakfast.  Richard chose a few apple tarts, and I decided on a croissant.  Then we went in search of coffee, which was a challenge.  The only place with carry-out coffee that we could find was McDonald’s.  We were a bit sheepish about going to a McDonald’s in Paris, but we really wanted coffee and we had no other options.  So, under the golden arches, we ordered two cafe au laits, grande.

Then we walked over to the Jardin du Luxembourg, dodging the many joggers and flower sellers who were circling the periphery of the park.  We found a place to sit that was just perfect, on a shaded bench next to a fine piece of statuary surrounded by flowers, and dug in to our repast.  The cafe au laits from Mickey D’s were surprisingly good, and the croissant was great — rich, flaky, and buttery.  Richard’s apple tarts were equally good, with a spicy apple compote tucked inside a slightly heavier, glazed pastry.  Say what you will about the French, but can we all agree that these guys know their baking?

The band at the Jardin du Luxembourg

After we sat, sighing with satisfaction at enjoying such a fine petit dejeuner in such a beautiful location, we noticed a band setting up at an adjacent bandstand and decided to stay and have a listen.  It was a 12-piece band with an odd assortment of instruments that included a xylophone, a piccolo, and a tuba.  They played an eclectic form of music that sounded like a jazzy version of oom-pah-pah Alsatian favorites, with the Austin Powers theme song thrown in for good measure.  As the band played a crowd gathered.  It made for a very memorable breakfast.

The Jardin du Luxembourg proves the value of urban parks as a place for memorable gatherings and communal activities.  It is a fabulous place.