Today we witnessed the Vassar Commencement.  This year is Vassar’s sesquicentennial (i.e., its 150th birthday) and it was a special day for everyone who attended. 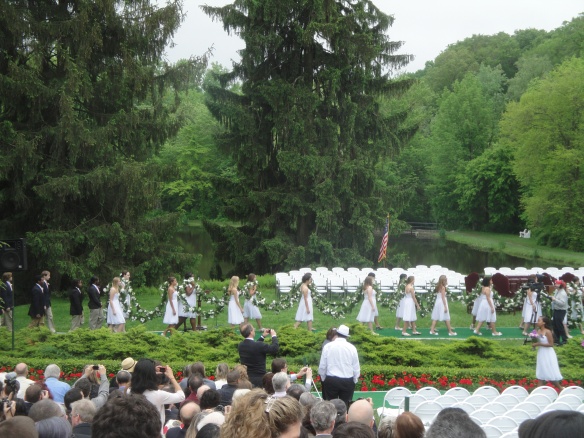 At Vassar, the commencements are held outdoors in a beautiful setting.  The stage is set up in a natural amphitheater with the Vassar lake in the background and tall pines framing the stage, and the chairs for the graduates and guests are set up on a gently sloping hillside.  As a result, there really isn’t a bad seat in the house — unless you get stuck behind one of those annoying parents who won’t sit down.

The skies were threatening but the rain, thankfully, held off.  We got to see many Vassar traditions, such as the “Daisy Chain” carried in by Vassar undergrads in white dresses, which has been a commencement staple for decades, and we learned about a number of other traditions in a speech given by Vassar’s president. 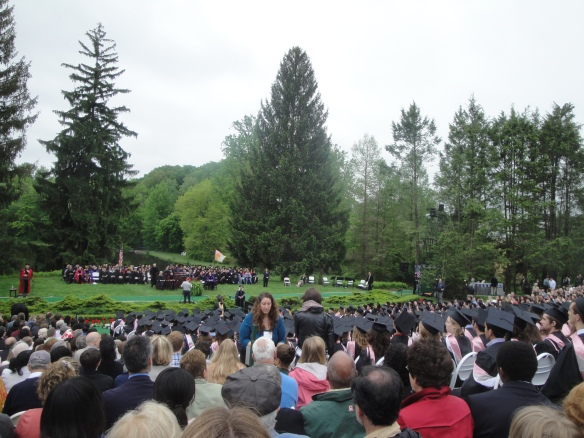 n fact, all of the speakers at the commencement did a good job.  There wasn’t a real clinker in the bunch, which means that the Vassar commencement is different from every other commencement I can remember.  The main speaker — Chip Reid of CBS news, himself a Vassar grad and the first male alum to be a commencement speaker — was especially good, and struck exactly the right note with a speech that was encouraging, funny, interesting, and not overlong.  (Great job, Chip!)  And, of course, we got to see Russell cross the stage and get his diploma. 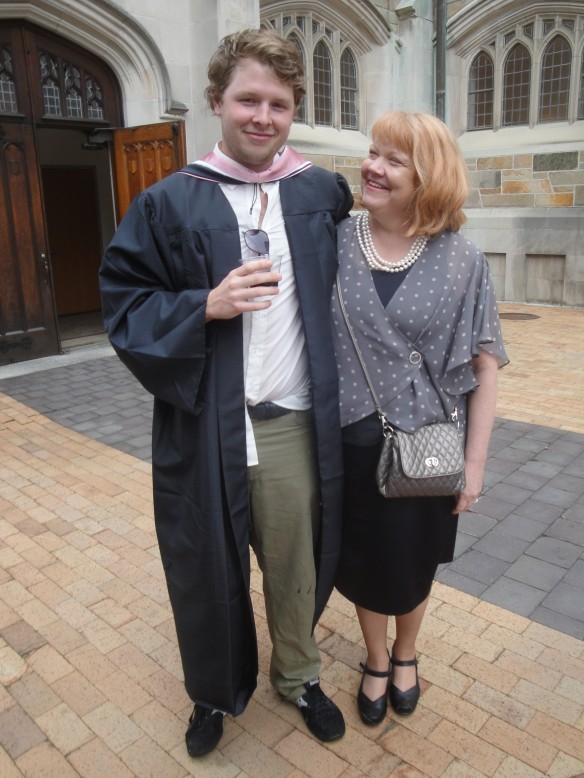 The new graduate and his proud Mom

Commencements are, of course, memorable for the graduates and their parents.  As a parent, I feel great pride and satisfaction about Russell’s accomplishment, and it was a real pleasure to meet his professors and fellow students.  But the emotions felt by parents, I think, pale in comparison to the confusing mix of emotions felt by the graduates.  There is relief at having stayed the course and happiness about your achievement, but also a certain wistfulness at realizing that your friends of the last four years will never again be so close and so close by — and, likely, trepidation about what will happen next.

Because commencements are so charged with emotion, I think the appreciation of the accomplishment may be get lost somewhat, only to be found in coming days when things have settled down.  That’s a good thing, in a way, because graduating from a fine school like Vassar College is an accomplishment to be savored.  Congratulations, Russell! 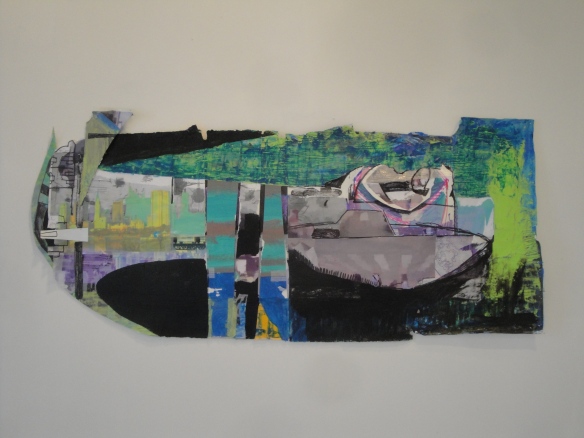 Yesterday we went to Russell’s senior art show.  It was held in two floors of a large, empty, decrepit building in a somewhat run-down part of Poughkeepsie, where Russell’s work was displayed along with the work of many other seniors graduating with arts degrees from Vassar. 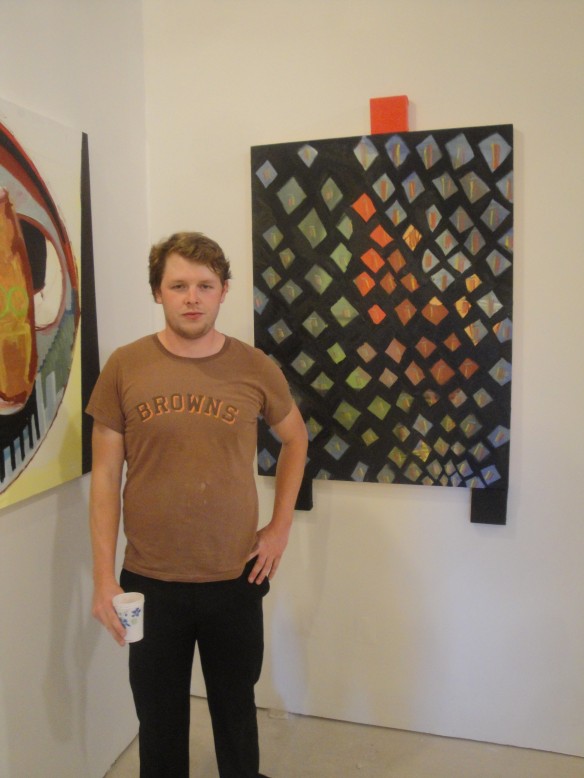 Although the conditions were not what you might find in a museum, the venue worked because the empty building had plenty of space that allowed each student to place their pieces on bare walls in one or more rooms.  The shabby surroundings — with exposed wires, damaged floors, and cracked windows — gave the place an eclectic feel that was well-suited to the eclectic mix of artwork being shown.  And what a mix it was!  There were paintings, and ink drawings, and pieces made of wax, and pieces made with lights, and toasters, and strings and mirrors, and flimsy chairs chained to the floor.

Russell’s pieces primarily occupied two rooms, although a few of his works were scattered at other locations in the building.  As always, we enjoyed seeing Russell’s works.  One of Russell’s friends mentioned that Russell is good at creating space in his pieces, and I thought that was a really interesting observation.  It also looks, to my uneducated eye, like Russell is experimenting with shapes and working with different kinds of objects that get away from reliance on the standard, rectangular canvas.  One of my favorite pieces, shown above at the top of this post, was totally outside normal canvas-oriented artwork, and the unusual shape really added to the feel the piece created.

There was a good crowd at the event, and we got to meet some of Russell’s professors and friends.  From looking at the show, it seems obvious that the collective Vassar arts community has had a real impact on Russell’s art — and my guess is that the reverse is true, too.