Last week, at a rest area along I-87, far north in upstate New York, I encountered this anachronistic scene.  It was like stumbling into some exhibit at the Museum of Modern American Culture. 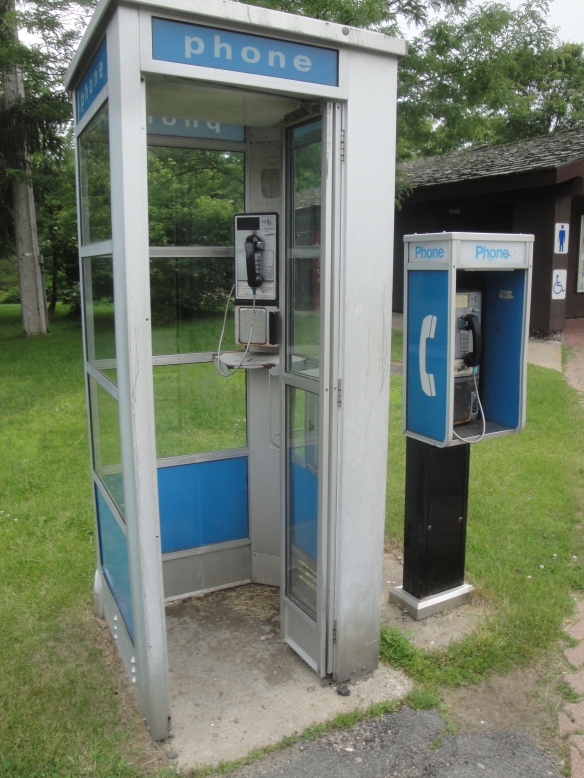 I can’t even remember the last time I saw the mini, open bottom public phone booth — and here it was, not only available for use but also side-by-side with the even older, full-fledged, classic telephone booth, in all its Clark Kent changing into Superman on a concrete pad glory.  And, to complete the sense of absolute historical accuracy, the phone booth lacked any sign of a phone book.

I’m not sure there is a full-length phone booth left anywhere in the Columbus area, much less one that is right next to the abbreviated version.  I wonder how often these public phone booths are used in our cell phone age?

Seeing these signs of days gone by was jarring, and made me think about how what was once commonplace can vanish seemingly overnight, without anyone really even noticing.

Back in May, Ohio high school principals showed surprisingly good sense and voted down a proposal to try to achieve “competitive balance” in Ohio high school athletics.  By a close vote, the principals rejected a reformulation of how teams are assigned to divisions that would have considered factors like open enrollment, historical performance, and socioeconomic factors.  In reality, the proposal was a response to complaints of public high school coaches and administrators who are tired of losing to parochial and private school teams in the playoffs and want to “level the playing field.”

Now I see that the Ohio High School Athletic Association is reviving the issue and will survey its members to “gather feedback on the competitive balance issue.”  In the meantime, an OHSAA committee will consider “more balanced” methods of placing schools into divisions.  Some are speculating that the public schools and the private schools will eventually be put into separate tournaments in order to promote perceived “fairness.”

It’s hard to believe that high school administrators don’t have more important things to worry about than “competitive balance” in athletics.  In any case, isn’t the eternal quest for a purported “level playing field” antithetical to what high school sports is supposed to be about in the first place?  Anyone who has participated in a high school sports is told that the goal is improvement, team play, sportsmanship, and playing the game fairly — not winning at all costs.  The fact that administrators have noticed that parochial schools are beating the daylights out of public schools, and are trying to rig the division assignment system to prevent that result, demonstrates that winning is truly the ultimate goal — and if it can’t be accomplished through hard work, dedication, and good coaching, we’ll try to get there by changing the rules.  Pretty pathetic!

Last night we watched the last episode of HBO’s new series Game of Thrones for this season.  We liked this show immediately, and if anything the series has gotten better as it has gone along, following twists and turns and shocking plot developments.  Do we really have to wait for months to see more of this show?

Game of Thrones has one crucial element that can separate a good show from a great one:  a villain who can be hated truly, completely, and without any reservation, a character so foul that you fervently hope they die in the most painful and humiliating way imaginable.  That villain is Joffrey Baratheon.  He is played so convincingly by actor Jack Gleeson that I’m not sure that I’d want to know Gleeson in real life.

Joffrey is a teenage twit who has assumed the Iron Throne, where all of his bad qualities have come to full and appalling flower.  And there are so many of them!  He is a sniveling coward, a sadist, a pretentious deceiver, an arrogant bastard, and a lazy wretch — among countless others.  The only thing that could have made Joffrey more repulsive would be to give him some kind of grotesque physical deformity, like a hairy, oozing sore on his upper lip.  On this show, however, the physical deformities have been reserved for others, like the character who had half his face melted off in a fire.

This show has lots of bad guys — evil Queen Cercei Lannister, her wicked brother Ser Jaime Lannister, a lying witch, untrustworthy manipulator Petyr Baelish, and braying weakling Virserys Targaryen have all been loathsome in their own special ways — but Joffrey Baratheon is the worst of the worst.  I’ll be ready to board the Joffrey hate train when the new season of Game of Thrones starts next spring.