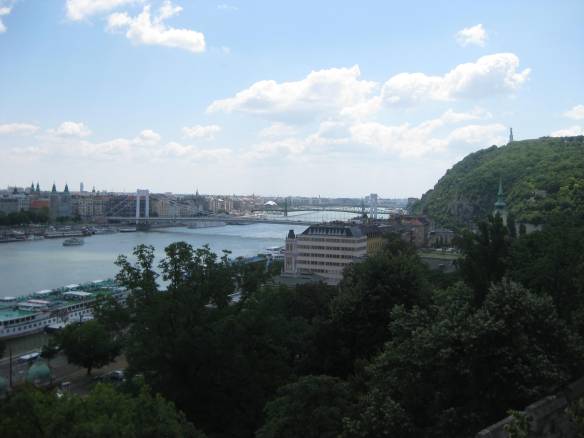 A view from the Buda side of Budapest.

My Eurail pass expired while I was in Vienna, so I took a Eurolines bus from there to Budapest for 19 Euros. In addition to being cheap, the Eurolines buses are surprisingly comfortable. All three of the buses I’ve taken so far have been less than half full, giving me more personal space than I had on the trains. The interiors of the buses are so clean they seem new. It’s also nice that there are electrical outlets in every other row. The main downside is that the bus stations tend to be in out-of-the-way places, not in the center of the city like the train stations.

My hostel in Budapest, the Mandarin Hostel, was also on the outskirts of the city, only one metro stop from the bus station. The Mandarin Hostel was wonderful, despite being a 30-minute walk from the city center. I can usually tell by the time I reach the reception desk whether I’ll like a hostel or not. In the case of the Mandarin Hostel, I saw the tall ceilings, the old, elegant marble staircase, the courtyard with broken-in lawn furniture and grill, and the absence of dozens of people milling around the reception desk, and I knew I would like it. It also helped that the employee at the front desk (and owner, I believe), named Zoltan, was friendly and knowledgeable about the city, and reminded me of Bob Newhart, except he had a really deep voice.

Mandarin hostel also had a great kitchen with many cooking tools I had never even seen before, in addition to the crucial can-opener.

I became friends with some guys in my room – an English fellow, an Irish guy, and two friends from Singapore. One night we went to a few pubs with a Romanian girl and a Finnish girl also staying at the hostel. Before we even left, the Irish lad had enough beers and liquor to put me in the hospital, without even seeming buzzed. 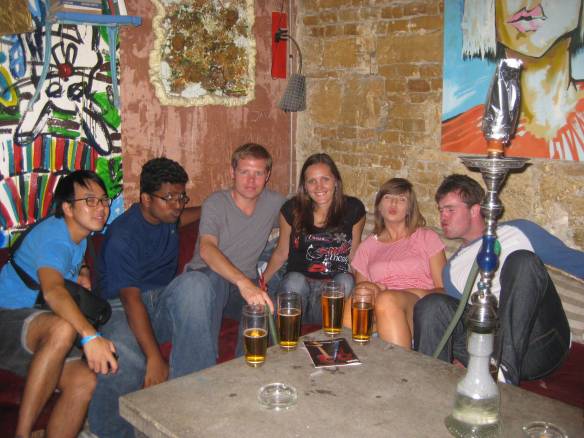 The gang at the hookah bar.

We went to two excellent bars where I had a couple half-liter Arany Aszok beers. It was a Sunday night, and both bars had a nice amount of people – not crowded, but not empty. We didn’t even have to wait for the foosball table at the first bar, where we played a few games. Both also played great music. The first one had a jazz band performing, and the second was playing obscure tunes by Grace Jones and Kraftwerk. At the second bar, we ordered a hookah and smoked strawberry-flavored tobacco, which reinvigorated some of us somewhat, it being past three in the morning.

The Finnish girl and the Singaporean guys went home after the second bar, while I opted, against my usual habits, to continue the night with the others. We got another round of beers at another bar while it grew light outside, then we walked through the empty streets to a Turkish-style bathhouse, a leftover from Turkey’s occupation of Hungary, arriving just as it opened at 6 A.M. 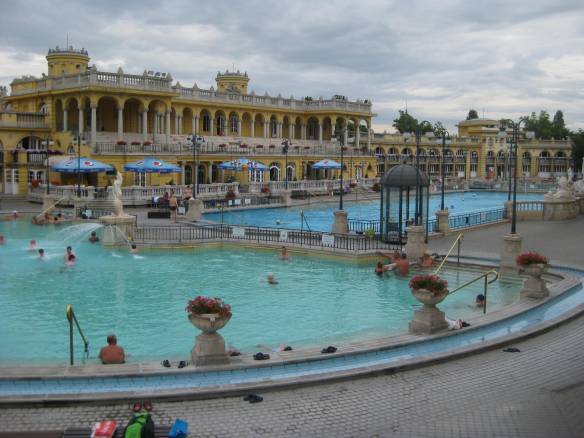 We were the youngest people in the baths by about 30 years, and we got unpleasant looks from the other patrons, as if they intuited that we had been out all night drinking. The baths complex was what I imagine the ancient Roman baths to be have been like: pools of varying temperatures surrounded by ornate columns, arches and statues. We started in a warm outdoor pool that had a whirlpool in the center. Then, we took a short but painful dip into a cold indoor pool that immediately chilled the bones in my toes. We proceeded to an even hotter indoor pool, then we returned outside. 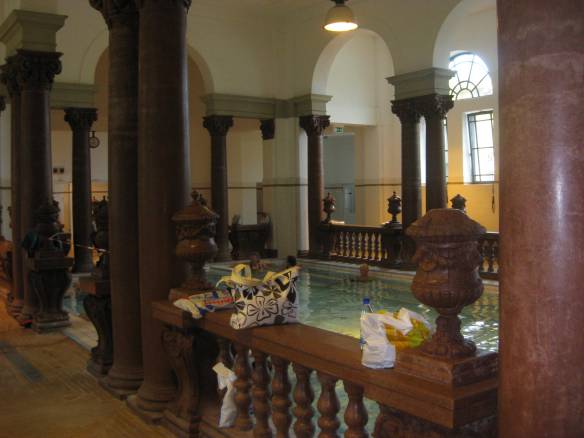 The others remained out there (some of them managed to catch a few winks in the pool), while I went back inside to try the thermal baths. They had already been to the baths a few days before and weren’t eager to come home smelling like sulfur again. The thermal bath gave me a pleasant tingling sensation all over my body, and I felt very tender and relaxed afterwards, although I did end up with a rotten-egg smell that remained even after another dip in the normal pool. After more than an hour at the baths, we took the metro back to the hostel and crashed. 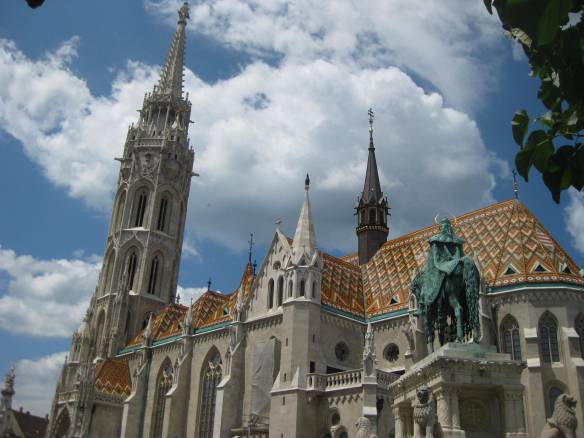 A cathedral in Budapest. 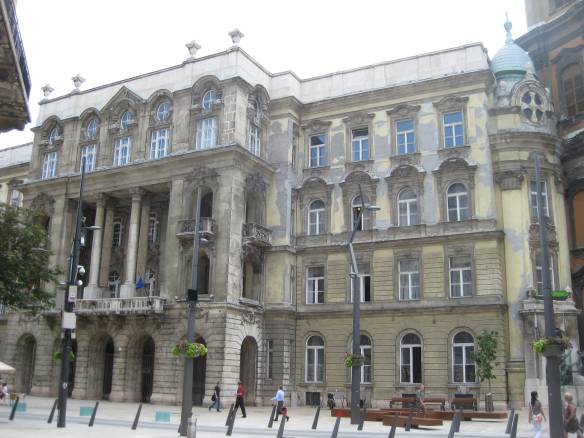 A beautiful but neglected building.

The ornate surroundings at the baths were not unusual – Budapest has a lot of beautiful architecture in unexpected places. A stroll through the city will take you by many unique buildings showing a mixture of Western and Eastern influences. Unfortunately, many of the buildings are falling apart, probably due to neglect during the communist era and damage caused by the rebellion of 1956. Hungary’s current economic situation has also probably played a role. It is clearly less wealthy than European countries to the west, with levels of homelessness I haven’t seen since I left the U.S. Budapest also reminded me of American cities in that its metro trains seem to be many decades old. 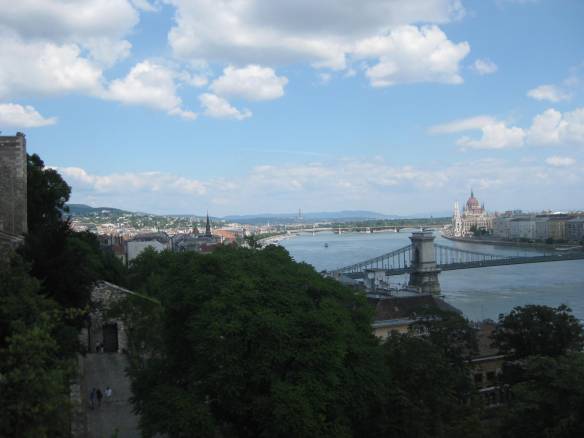 Budapest’s riverfront rivals Porto’s in its beauty. The Buda side (Budapest is actually two cities, Buda and Pest, joined together) is hilly, heavily wooded, and relatively empty, with a medieval palace atop one of its hills. The Pest side is dense with gothic churches and government buildings. Despite being under communist rule for decades, there are very few ugly concrete-and-glass buildings in Budapest.

One day I took a long bus ride to Memento Park, where the propagandistic statues of the old communist regime have been deposited. Some of the statues were actually really powerful. One that struck me was of a worker striding forward with his arms raised in triumph and a determined look on his face, presumably meant to represent the impetus of the communist revolution. Looking at the statue, I felt like the man had enough forward momentum to break free from the platform and walk out the park. 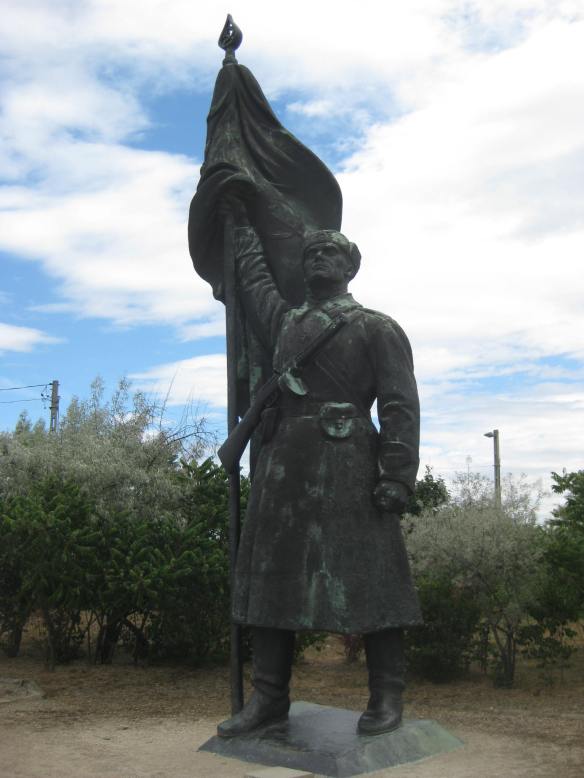 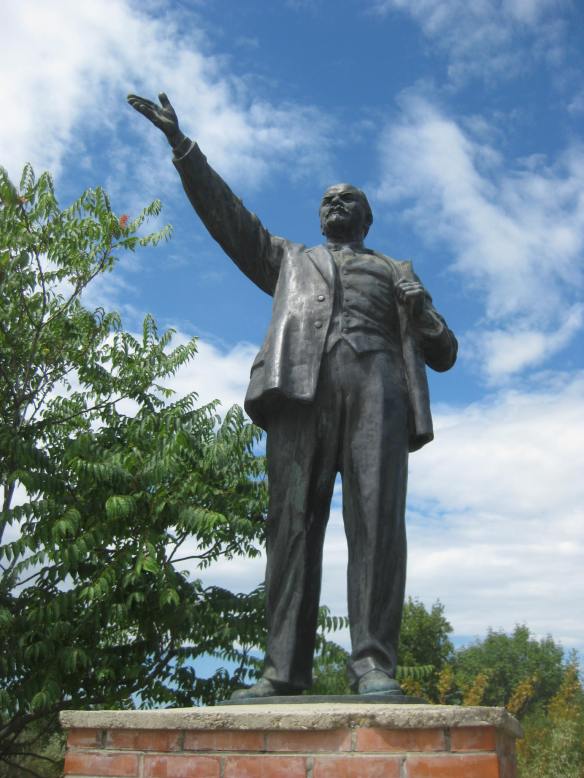 A statue of Lenin. 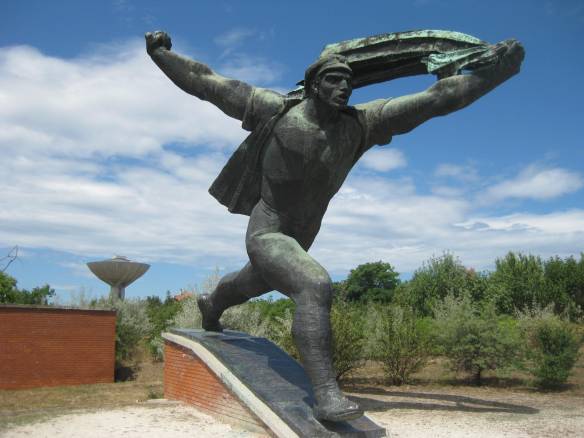 Budapest was another place where a great hostel plus a great city equalled a great time for me. I’m glad that I’d decided to book a generous five nights there.