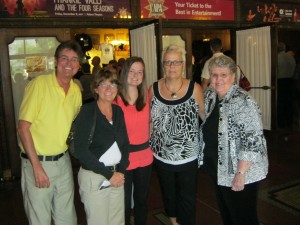 No ordinary Sunday night for some members of the Webner clan which included special guest BJ. We all went by limousine to Cap City diner compliments of Agnes then off to the Ohio Theatre to see the Jersey Boys.

Jersey Boys is the wonderful story of blue collar kids – Frankie Valli and the Four Seasons and their personal struggles as seen through the eyes of the four original members of the band. We had seats in the Orchestra Pit second row so we were no more than a few feet from the actors/musicians which made the show all the more interesting.

We lucked out and got to see understudy Courter Simmons who the people I talked to said was better than the “regular Frankie”. He really had an amazing voice and when he sang his solos you could really feel his passion. I noticed tears in his eyes a few times. Of course the shows includes all of the Four Seasons hit songs.

Here’s a clip from the Jersey Boys show in London – check it out if your a music lover, but if you had a couple of the Four Seasons albums like I did in the seventies this show is a must !