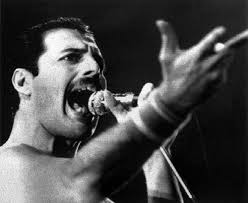 Today, September 5th would have been Freddie Mercury’s 65th birthday. Of course I had all of Queen’s albums when I was younger and I think he has arguable one of the best voices with one of the broadest ranges of all time. Unfortunately he died in 1991 after a battle with HIV at the young age of 45. Below are two of my favorite Queen songs in his memory.

The video’s speak for themselves – I hope you enjoy them as much as I still do !

Today Teamsters President Jimmy Hoffa, Jr. revved up a crowd for President Obama as a Labor Day rally in Detroit, Michigan.  He said the “tea party” had declared a “war on workers” and added:  “President Obama, this is your army. We are ready to march. Let’s take these son of bitches out and give America back to an America where we belong.”

I don’t mind the vulgarity and martial imagery — anybody warming up a crowd at a union event on Labor Day can get carried away, I suppose — but I’m not sure what “war on workers” Hoffa is referring to.  Presumably he is talking about the efforts to limit collective bargaining rights for public employees in states like Wisconsin and Ohio.  For the most part, however, the agenda of the “tea party” — if such an entity can even be said to exist — seems to be a pro-worker agenda.  The “tea party” element wants to restrain the growth of government, keep taxes low, avoid unnecessary regulations that restrict economic growth, and let private enterprise develop and create jobs.  What is so “anti-worker” about that?

Many union leaders, like Hoffa, apparently equate a “pro-worker” agenda with a “pro-union” agenda.  Anybody who pushes a “pro-union” agenda necessarily supports government spending, government growth, and government regulation, because public employees have been one of the few growth areas for unions in recent decades.  If you follow a pro-worker agenda, on the other hand, you want to see jobs created, whatever those jobs may be.  How many more people — Teamsters included — would be employed on this Labor Day, for example, if our government hadn’t imposed a moratorium on certain oil drilling and imposed restrictions on our ability to exploit our reserves of oil and natural gas?

The news from Europe has not been good for some time now — but today may be a turning point into even more negative territory.  As the United States enjoyed the Labor Day holiday, equity markets across Europe plunged by an average of 4 percent.  Germany’s DAX took the hardest hit, falling by more than 5 percent.

It’s not hard to understand why European investors are troubled.  Greece, Spain, and Portugal all are struggling with serious debt problems, and recently Italy, one of Europe’s biggest economies, also has tumbled into distressed territory.  In the meantime, the large, more solvent northern European countries — particularly Germany — have had to prop up their profligate southern European partners.  Germany’s financial support of free-spending Eurozone countries hasn’t gone down well with German voters, who delivered a stinging rebuke to the ruling party in regional elections.

Interestingly, some political leaders in Germany and elsewhere seem to see the ongoing problems as a reason for an even closer political and economic union between the nations of Europe — whereas European citizens, in contrast, appear to be yearning for more control over the destinies of their own countries.  The depths of the Eurozone debt problems are not yet fully understood, and analysts wonder how much worthless debt is held by European banks and whether the piecemeal bailout efforts will ever staunch the outflow of investor confidence.  Given all of these circumstances, it’s not hard to foresee more hard times ahead in the Eurozone.

I’m not talking about the modern stuff that sounds like pop music, even though its sung by some poser wearing a cowboy hat and boots.  No, I’m talking about the country music of the ’50s, ’60s, and ’70s, when singers like Hank Williams, Patsy Cline, George Jones, Tammy Wynette, and Merle Haggard ruled the airwaves.  I’m talking about the music that had that undefinable, unapologetic twang to it, with steel guitars and songs about getting dumped and drinking your troubles away, sung by honest, unsynthesized voices.

One of Merle Haggard’s great songs, Tonight The Bottle Let Me Down, is a good example of what I would consider to be a true country song, sung by one of country’s greatest voices (even though the rendition on this You Tube video includes an uncommon horn section).  How can anyone not like this kind of American music — as authentic and deeply rooted in our culture as jazz and blues?

Although Congress has been enjoying its August recess, the staffs of the members of the Joint Select Committee on Deficit Reduction — the so-called “Super Committee” — have been hard at work.  The Committee itself will begin meeting soon.  So, what’s the prognosis for whether the Super Committee can get the deficit reduction job done?

What’s interesting, and discouraging, about the spectrum of opinions is that they all seem to be based on the kind of “inside baseball” political analysis that most of us find bizarre and infuriating.  No one seems to think that the members of the Super Committee will come to the table ready to reach a significant deal that achieves honest, meaningful deficit reduction because America needs that result.  Even the optimists apparently think that, if a deal is reached, it will be because Republicans and Democrats will conclude that a deal is the best result for Republicans and Democrats, and not because that result is best for the country.

Have we reached the point where our politicians can never lay aside partisanship and recognize that, if they don’t take effective action soon, this country will be brought to its knees?  I think that terrible reality may be the case — which is why I am in the pessimists’ camp on the likely outcome of the Super Committee and its deliberations.