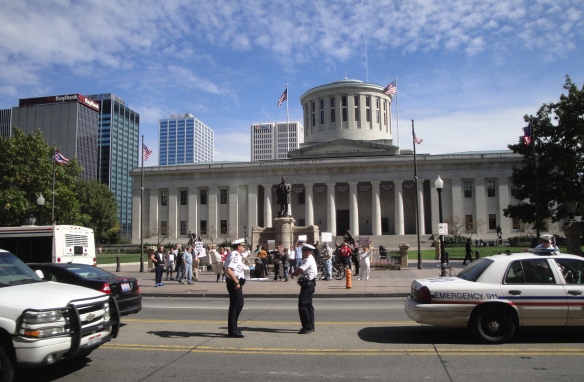 Today the “Occupy Wall Street” group held a protest in downtown Columbus at noon today.  The protest was mentioned on NPR this morning, so I walked over to check it out over the noon hour.  It was, to say the least, underwhelming.

I would estimate that about 20 protesters were there — and with the mention of the protest on NPR and the many college students and political types in town, I was expecting a much larger number.  The skimpy turnout was only a tiny fraction of the huge crowds that showed up for the Senate Bill 5 protests at the Statehouse earlier this year.  Then, the protesters filled pretty much every square foot of the Statehouse lawn and surrounding walkways.  Today’s little band, in contrast, was huddled on the sidewalk in front of the McKinley statute facing High Street.  Their numbers were so small that you could easily walk past them on the sidewalk. 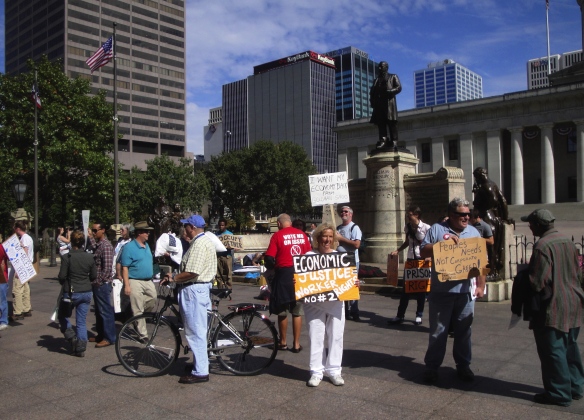 The protesters were a motley group, with no apparent theme.  Among the signs I saw were one supporting prisoner’s rights, another opposing Issue 2, one simply reading “Glass-Steagall,” and another handwritten sign purporting to be a quote from Andrew Jackson.  There also was a sign opposing corporate greed, one that was anti-yuppie, one that advocated taxing the rich and ending “their war,” and another that blamed Goldman Sachs.  There were no chants, or drums, or much of anything in the way of noise. If it weren’t for the fact that two police cruisers and uniformed officers were present, you wouldn’t have even known a protest was going on.

According to the news media, the “Occupy Wall Street” protests are growing and spreading to other cities.  In Columbus, however, not so much.