1939 was not a great year.  The Great Depression had lingered for 10 years, with no end in sight.  In Europe, the growth of Nazi Germany and then the invasion of Poland brought on World War II.  Aggressive totalitarian regimes were found across the globe.  You would not have blamed someone of that time for feeling deeply pessimistic about the course of human history. 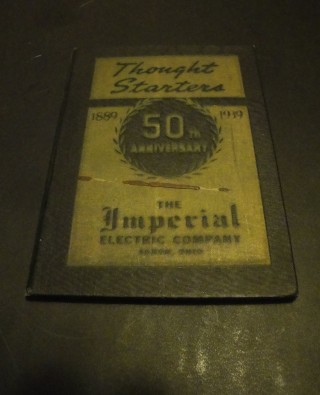 And yet, there were optimists, even in 1939 — and I think Grandpa Neal was one of them.  His bookshelf included a small book called Thought Starters published in 1939 by the Imperial Electric Company of Akron, Ohio.  It has an unabashed motivational message, with chapters with titles like “Success Road is Wide Open,” “The Will to Win,” “The Go-Getter’s Way,” and “Ideas Are Worth More Than Cash.”  The book’s theme is that an optimistic approach, where opportunities are recognized and pursued, will lead to success.  The hopeful bullishness of the book is captured in this passage from the “Opportunities Galore!” chapter:  “You are living in a wonderful age.  Just think!  The greatest developments in the world have occurred during the past century.  And the years ahead will make current progress look like child’s play!”

Grandpa’s copy of Thought Starters is personally signed by John Hearty, the president of the Imperial Electric Company. I found myself wondering what happened to the positive-thinking Mr. Hearty and his company.  It turns out that the Imperial Electric Company survived the Great Depression and recently celebrated its 100th anniversary.  Mr. Hearty turned the company over to his son, who ran it until it was sold in 1983.  No doubt the optimistic, opportunity-driven attitude reflected in Thought Starters helped the company to be successful.

If people in 1939 could be optimistic about the future, we should be able to muster some optimism now.  Rather than wringing our hands about our current predicament, our country and our leaders be well served by adopting some of the can-do, positive attitude reflected in this little book.

2 thoughts on “From Grandpa’s Bookshelf: Optimism Amidst The Great Depression”