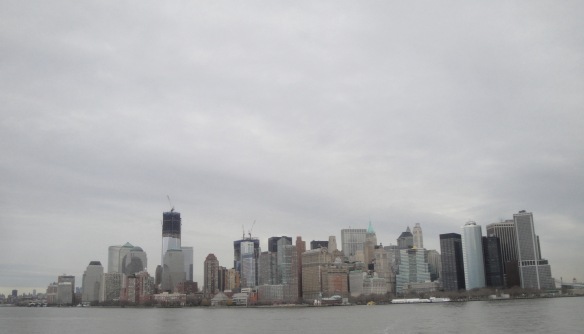 We are in NYC and decided to visit Liberty Island and Ellis Island today.  I’ll post a photo of the Statue of Liberty later, and will have more on Ellis Island tomorrow — but for now I just wanted to put up a photo of the beautiful downtown Manhattan skyline as we pulled away from the Battery pier in the Miss Liberty and headed toward Liberty Island.

It was brisk day and was cold on the deck of the ferry, but I was warmed by the sight of the skyline and by the view of the Freedom Tower, which appears in the right part of the photo, being erected on the grounds of the fallen Twin Towers.  The skyline, with the awful void now being filled, is a wonderful sight.

1 thought on “Downtown Manhattan From The Deck Of Miss Liberty”