Here are some words that describe the Cleveland Browns franchise:  Suck.  Blow.  Dismal.  Putrid.  Woeful.  Hopeless.  Unrelentingly, inevitably awful.  Hey, does anyone have a thesaurus handy? 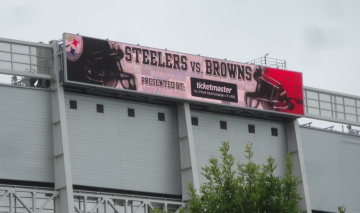 We are at the end of the NFL season.  The Browns are long since out of the running, while the other teams in their division — the mighty Steelers, the hated Ravens, even the usually laughable Bengals — are fighting for playoff spots and home field advantage.  It’s as predictable as the crowds of shoppers returning unwanted Christmas presents they received from Aunt Mildred.

Every year, there is supposed to be a new savior for this cursed franchise.  Once it was Tim Couch, or Butch Davis, or Phil Savage, or Braylon Edwards, or Romeo Crennel, or Eric Mangini.  Lately it is supposed to be Mike Holmgren, Pat Shurmur, Colt McCoy, or Peyton Hillis.  Of course, the Browns are never saved — they might bob up to a level of mediocrity every third season or so, but then they sink back down to their accustomed record of disaster and futility.  This year they are 4-11 and are ready to get waxed, again, by the Steelers in their last game.

The worldwide Browns Backers are among the most faithful fans in the world, but they also have a ridiculous capacity for self-delusion.  Right now they’re talking about maximizing the Browns’ draft position, like it is some great positive.  It isn’t.  The Browns have frittered away countless high draft choices before, and they’ll do it again.