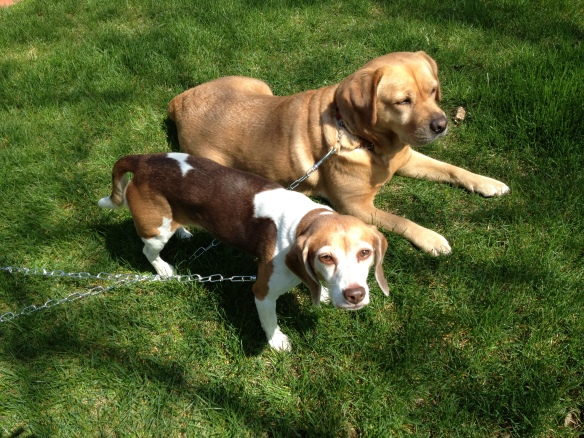 It’s a beautiful day today — perfect for some much needed yard work.  I brought Penny and Kasey out with me, and they lolled on the cool green (but weed-filled) grass, enjoying the bright sunshine and the neighborhood doings as I worked.

Be careful when tapping salt onto your eggs this morning, or drinking something fetched for you by another:  it’s April Fool’s Day, and the prankster in your family might have loosened the cap on the salt shaker or spiked your drink with lemon juice in order to get a chuckle at your expense.

How did April Fool’s Day come to be?  Even though it’s been around for centuries, nobody knows for sure.  Some say it dates back to the date in 1582 when, by order of the Pope, the Julian calendar was replaced with the Gregorian calendar, and as a result the traditional New Year’s Day, on April 1, was replaced by New Year’s Day on January 1.  Some rustic types supposedly didn’t get the news and made fools of themselves by celebrating New Year’s Day three months too late, and the tradition of playing pranks on the gullible began.  Others say it started with the Roman Emperor Constantine, who appointed one of his court fools Emperor for a day, or just reflects the general high spirits that come with the end of winter and the hope of spring.

Whatever the origin, April Fool’s Day is celebrated around the world.  I particularly like the French variation, where the target of a prank is called an “April fish” — to reflect the fact that April fish are young fish that are easily hooked.

Kish is on the road today, so I’ve got nobody to fool except the dogs.  April Fool’s Day pranks on dogs don’t seem very sporting.  At some point today, however, I am going to ask Penny if the refrigerator is running.