Today is Kish’s and my 30th wedding anniversary.  They have been 30 wonderful years — but it’s still hard to believe it has been 30 years since that special day when we tied the knot. 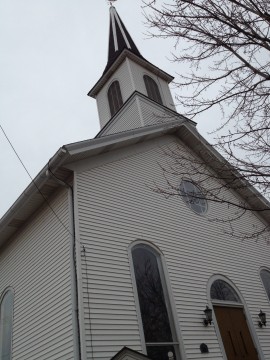 It had been warm and in the 60s only a day or two before, but April weather in Ohio is notoriously unpredictable.  A cold front moved in, and when April 3, 1982 dawned in Vermilion, Ohio it was frigid, with snow falling and a brisk wind blowing.  We were married in Kish’s family church by a minister we really didn’t know.  He had insisted on counseling us about marriage; it’s always made me chuckle that he was divorced within a year or so while Kish and I have somehow muddled through and remained happily married for decades.  Perhaps he’s just an example of the old saying “those who can’t do, teach.”

We kept the ceremony as short as we could, consistent with the requirements of the church.  The entire service, from beginning to end, took about 12 minutes.  We planned it so that we didn’t have to light candles, read scriptures, or really do much of anything other than remain upright and repeat our vows.

I was glad the ceremony was short and simple, because I was nervous.  UJ, my best man, and I stayed in the baptismal tank until we were summoned into a full church.  I stood there, uncomfortable being the center of attention in my traditional black tuxedo, but felt a lot better when I saw Kish coming up the aisle, looking cool and beautiful and radiant in her lacy white wedding gown.  I knew that I was making a smart decision, and I was right.