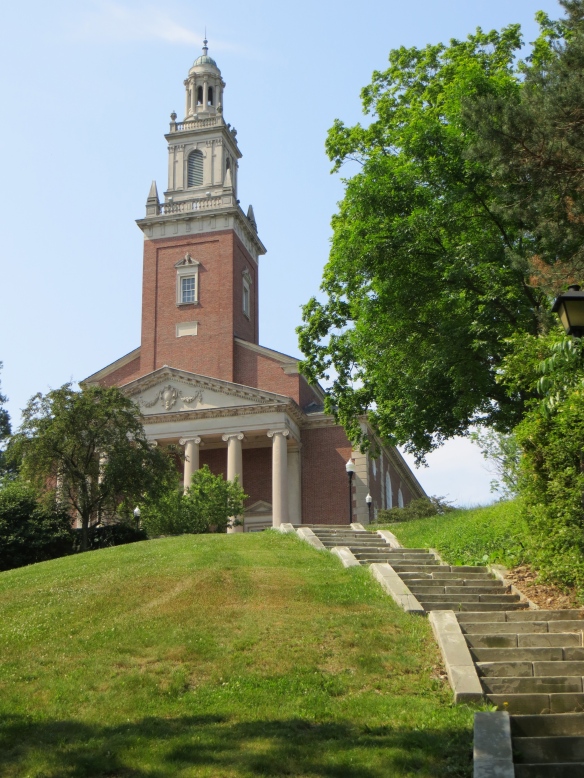 This afternoon Kish and I decided to drive over to Granville, Ohio — the home of Denison University and one of many scenic and interesting Ohio college towns.  Granville is about 20 miles due east of New Albany.

We walked around the college grounds and the picturesque main street, but the heat and lack of breeze — even on Denison’s hilltop campus — was too much for us.  So, we retreated to Brew’s Cafe for a bite to eat, then topped things off with some Almond Joy cones from Whit’s Frozen Custard.  It was a spectacularly delicious way to cool off.

The little trip also allowed me to take my first photo with the new camera — of the Swasey Chapel on the Denison campus.

Nothing says “summer” and impending travel quite like buying a new camera. 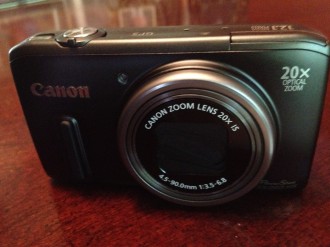 My old digital camera was a Sony Cyber-shot.  It was a good camera, about three years old, but it developed a smudge spot on the interior of the lens that I could not fix.  Rather than paying somebody about as much as I spent on the camera in the first place to try to remedy the problem, I stopped using the Cyber-shot and for the last few months have been relying on my iPhone instead.  The iPhone camera is fine, and handy in a pinch, but it doesn’t have much zoom capability and some of the other features you want in a good digital camera.

We’ll be on the road a bit over the summer, including my first-ever trip to the Pacific Northwest and a visit to Maine, and I want to have a good camera to record our adventures.  Today I bought one.  After some advance research and careful consideration, I settled on the Canon PowerShot SX260 HS.  It fell into my price range (about $300, with memory card), is supposed to be sturdy and reliable, and has the increased zoom focus and other features I want.  Much as I like taking pictures — and I do, so much so that Kish enjoys kidding me about it — I really don’t have the photographic ability, or the bank account, to justify spending more than a few hundred dollars on a digital camera.

I owned Canons in the film camera days of yore, and I was always happy with them. With my new gadget, I feel a bit like a kid with a new toy.

SpaceX’s Dragon capsule has successfully rendevoused with the International Space Station and has been snagged by the space station’s robot arm.

The Dragon capsule therefore becomes the first privately owned space vehicle to reach the ISS.  This morning the astronauts on the space station opened the capsule and entered it, conducted a quick inspection and found no sign of any problems with the interior, and indeed reported that the capsule had that familiar “new car smell.”  So far, SpaceX’s Falcon rocket and its Dragon capsule have performed flawlessly — reaching orbit, conducting the maneuvering tests that showed that the capsule could safely be brought near the ISS, and then ultimately delivering the payload.

We now have a private company with the technology and human know-how to put a vehicle into space and haul cargo to an orbiting destination.  The Dragon’s successful delivery is a huge step forward toward increased exploration and development of space, in an era where commercial entities will bear an increasingly significant part of the cost — and, not incidentally, will look to reap profit from their investments.  With SpaceX leading the way, other companies will not be far behind.