I’m old enough to remember when some members of the younger generation thought Mao Zedong and the Chinese Communist Party were pretty cool.  You’d see people wearing t-shirts with Warholesque portraits of Chairman Mao (and of Che Guevara, too, but that’s another story), talking about the radical reforms that the brave Chinese Communists were attempting, and quoting from the sayings of Chairman Mao like he was a modern-day Confucius. 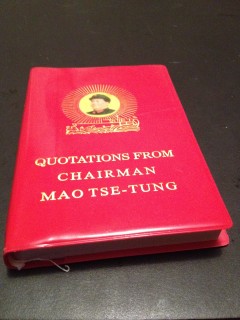 Both Richard and Russell have been to the Far East (Richard to China and Russell to Japan and Viet Nam) and one of them came back with Quotations From Chairman Mao Tse-Tung — Mao’s famous “little red book.”  I ran across it the other day and thought I would look to see what all of the fuss was about.

Having read the book — until I could take no more — I can safely say that Chairman Mao was one of the most boring writers ever.  Not only are his pronouncements often nonsensical drivel, it’s hard to imagine more leaden prose being written by any sentient being.  Consider this chestnut from the chapter Socialism and Communism:

“The people’s democratic dictatorship uses two methods.  Towards the enemy, it uses the method of dictatorship, that is, for as long a period of time as is necessary it does not let them take part in political activities and compels them to obey the law of the People’s Government and to engage in labour and, through labour, transform themselves into new men.  Towards the people, on the contrary, it uses the method not of compulsion but of democracy, that is, it must necessarily let them take part in political activities and does not compel them to do this or that, but uses the method of democracy in educating and persuading them.”

Huh?  Not only does this passage bear no relation to the reality of China under Mao — except for the dictatorship part, I guess — but I fell asleep about halfway through.  And the Little Red Book is chock full of such blather.

It just goes to show — you can’t just a book by its little red cover.