It was about 3:30 a.m. when the first phone call came.  It jarred us awake from a deep sleep.  As usual when you get a call in the middle of the night, you immediately think it’s some kind of family emergency.  Fortunately, that wasn’t the case. 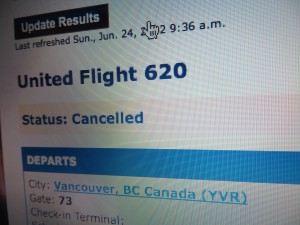 No, it was a robotic voice giving us the happy news that our flight plans had to be changed.  Half-asleep, my first reaction was:  Whuh?  The robot warmly advised that United had changed our booking so that we would fly to Columbus through Houston, and get in tomorrow morning.  Tomorrow morning?

By now fully awake, I thought:  Gee, thanks, United!  So I went to the united.com website and confirmed that, sure enough, the first leg of our trip back was cancelled.  Cancelled.  Such grim finality in that word.  Not like “Delayed,” where you retain a shred of hope that you might still be able to get through, somehow.  No, “Cancelled” is like the clanging shut of the cell door on your first night at Shawshank Prison.

Fortunately, we booked through American Express Travel, so I had a helpful live human being to call.  He looked at the situation, realized that there were non-United flights available, and came up with an alternative plan that is supposed to get us back tonight, although much later than originally planned.

So we went back to bed, slept fitfully, and now we’re off to the airport, hoping that further travel catastrophe doesn’t strike.  A day of potential travel hell awaits.