I didn’t get to see most of yesterday’s Ohio State win over Michigan State — I was at a wedding, thank you very much — but that doesn’t mean I can’t savor the sweet taste of a hard-fought and much-needed Big Ten triumph. 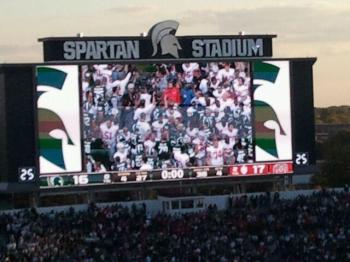 Michigan State clearly is one of the better teams in the Big Ten, so any victory over the Spartans is one to be prized.  Beating the Spartans in front of the Michigan State faithful is so much the better.  Ohio State’s defense played its best game of the season — holding Michigan State to 34 yards on the ground makes a serious statement — and the offense played well enough to somehow overcome three turnovers.  How often do you see a team lose the turnover battle, 3-0, on the road, and still pick up a win?

That reality, in fact, might be the ultimate story of this game.  Last year, Ohio State found ways to lose games they should have won.  Yesterday they found a way to hang on to a win that easily could have been a loss.  Winning breeds winning attitudes, and winning attitudes and confidence breed more victories.  Now, if Ohio State could just figure out how to hold on to the football. . . .

The Buckeyes will need to make every possession count next weekend, when Nebraska comes to town for a night game at the Horseshoe, fresh off a come-from-behind home win over a Wisconsin team that let a big lead melt away.  (Sound familiar, Buckeye fans?)

Hearty Buckeye thanks to Mike N., who went to yesterday’s game, for taking the photo of the scoreboard shot that accompanies this post.

1 thought on “Big Win To Start The Big Ten”