There are five structures on Hen Island in Lake Erie:  a combination boathouse, kitchen, and dormitory, a bunkhouse, the Pete Nowak Lodge, a utility shed — and a small, two-story building at the rear of the island called “The Maples.” 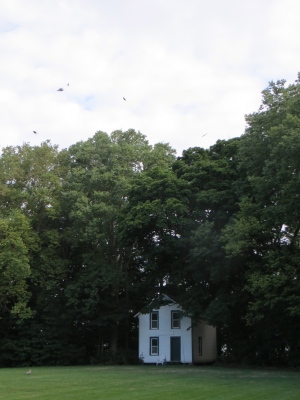 Of the structures, The Maples may have the most interesting history.  It was the no-frills living quarters of the hired men who — in the days before the internal combustion engine and the outboard motor — rowed the Quinnebog Fishing Club members out to Old Hen Island.  The island is miles away from the shore in any direction, and rowing out to an island in the middle of Lake Erie had to be hard work, especially when the weather turned foul and whitecaps dotted the surface of the shallow lake. Why is it called The Maples?  The answer to that basic question is lost in the mists of time.

The rowers had to put their backs into their work to make it out to the island — but I’m guessing that when they reached their destination and tossed their duffel bags down they had a very good time until the departure hour arrived.  Although the building is now used for storage, there must have been tables and chairs and a stove on the first floor and bunk beds on the second floor.  No doubt poker games were played, flasks of cheap whiskey were quaffed, laughter rang out at a bawdy joke, and a line or two was wet from the back shore of the island.

The Maples is a silent place, now, but it’s not hard to hear the tales it has to tell.