Please – I just don’t get it !!! Mitt wants more defense spending ! This last month the big question in Money magazine to subscribers was How would you balance the Federal Budget – 43% of which I was one who said yes to cutting Defense Spending – 29% said raise taxes, 15% said cut Medicare and 13% said cut Social Security. 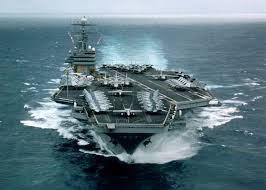 The difference between the president and Mitt Romney is $2 trillion dollars, Mitt wants us to build more aircraft carriers and he wants to add 100,000 more conventional forces. Do we really need this ? Today close to 16% of the federal budget is spent on defense and the United States accounts for about 41%  of the worlds current military expenditures. President Obama wants to put the brakes on defense spending.

Mitt wants to make sure that we have a military so strong that no one wants to test it. A large military simply makes no sense in this day and age, we need a military that is leaner more agile and more efficient. It’s only my humble opinion, but I am bothered by Mitt’s military eagerness and it reminds me quite a bit of George Bush. Does this bother anyone else, am I wrong ?

3 thoughts on “Ohhhhh No – Not More Defense Spending”