Science continues to achieve amazing advances in our ability to detect, measure, and analyze planets orbiting stars far outside our solar system.

So far, scientists have discovered and confirmed the existence of more than 800 planets.  Most of the planets, however, are huge gas giants, like Jupiter or Saturn in our solar system.  The latest advance in detection capabilities came this week, when scientists announced that they have detected the lightest planet to orbit a Sun-like star — and the star just happens to be Alpha Centauri, a weird, triple-star system that is the Sun’s nearest galactic neighbor.

Alpha Centauri, for those who fell asleep during astronomy class, is a mere 4.3 light years away.  Of course, one light year is 6 trillion (6,000,000,000,000) miles away, but who’s counting?  The planet scientists have detected is about the mass of our good Earth.

Before you start worrying that little green men might appear on your doorstep tonight, take a deep breath:  the Earth-sized planet is closer to Alpha Centauri B than Mercury is to the Sun, so it’s probably not conducive to life.  Still, the discovery is remarkable.  In the not too distant future, scientists will use this detection technology to find a planet about the size and mass of Earth, orbiting a star a lot like Sol, at a distance that would suggest that it is likely to be temperate.  What will that mean?  My guess is that we will train every radio telescope and sensory device we have in the direction of that planet, listen as hard as we can, and hope.

If, like me, you are an early riser, you are used to moving around in the dim, dark, pre-dawn hours.  Those moments often offer the early bird a special solitude, and an unmatched opportunity for quiet, rewarding contemplation. 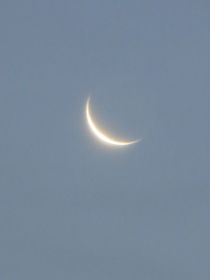 When you are in a remote place, like Lake Temagami, the sense of peaceful tranquility found in these early morning hours is multiplied tenfold.  A casually placed canvas chair on a dock becomes an irresistible perch where you can drink in the pure air, admire the crystalline sliver of the crescent moon far above, and watch the sky gradually turn from black, to charcoal, to deep blue.

I used that perch, and I thought no great thoughts on this quiet morning — but I did come away with a wonderful and satisfying sense of inner calm.

Moderating last night’s slugfest of a “town meeting” debate between President Obama and Mitt Romney was no enviable assignment.  Did CNN’s Candy Crowley overstep her proper role when she intervened during the candidates’ disagreement about Libya?  I think she did.

Were Crowley and the President right in their interpretation of the Rose Garden statement?  The official White House transcript of the remarks is available here, and I think the interpretation of those remarks is highly debatable.  The President did mention “acts of terror” — in paragraph 10 of the 13-paragraph statement — by saying:  “No acts of terror will ever shake the resolve of this great nation, alter that character, or eclipse the light of the values that we stand for.”   But is that lone reference, which refers to multiple “acts of terror” and restates a time-honored presidential theme so oft-repeated that has almost become a platitude, really labeling the Benghazi attack a terrorist act?  Moreover, the President earlier states, in the fourth paragraph:  “We reject all efforts to denigrate the religious beliefs of others.  But there is absolutely no justification to this type of senseless violence.”  The statement about “denigrat[ing] the religious views of others” seems to be a reference to the YouTube video, and typically you would not call a planned terrorist act “senseless violence.”

My point is not to argue who was right or wrong in their characterization of the statement, but rather to note only that it is a debatable issue and to observe that Crowley stepped outside of her proper role in her interjection.  By purporting to state what the President “in fact” did, Crowley presumed to act as a judge.  She tossed the President a lifeline of sorts — which the President eagerly grabbed by asking Crowley to repeat herself — and she caused partisans in the audience to violate the “no applause” edict.  I think Crowley herself realized that she had blundered, because she immediately tried to even the ledger by saying that Romney was right in some of his criticism.  The proper course, however, would have been to say nothing, and let the people decide for themselves.

Crowley’s interjection was unfortunate for a larger reason: it feeds into an increasingly prevalent view that the news media is biased and can’t be trusted.  People who have that view and watched last night’s debate will conclude that if a member of the media can’t refrain from stating their personal interpretation even while moderating a presidential debate, the media can’t be trusted, period.  That’s bad for our country, because we need the press, warts and all, to ferret out the news and report it — and for that process to work we need for people to believe that the press is doing so fairly and objectively.