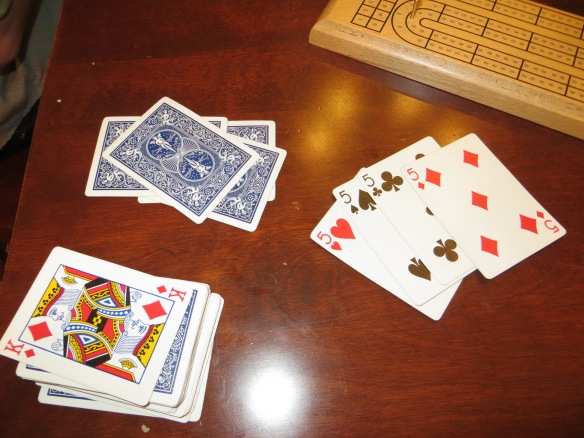 I’ve been playing cribbage for more than 40 years, with my grandfather, my father, my uncles, my brother, my brothers-in-law, my sons, my college roommate, and my friends.  Tonight I had my biggest hand ever.

It was a 28.  It came when Richard and I were playing two-handed, smoking cigars and drinking beer.  Four fives in my hand and the king of diamonds cut.  Fifteen-two, -four, -six, -eight, -ten, -twelve, -fourteen, -sixteen, and 12 points in pairs for 28.  It was a thing of beauty, an historic achievement, and entirely fit to be memorialized for all time with a photo and a blog post.

In cribbage, there’s only one possible hand that is better than a 28 — a 29, which occurs when you’ve got three fives and a jack in your hand and the five of the same suit of your jack is cut.  I’ve never had a 29, and if I play cribbage for another 40-odd years I probably never will.  But, after tonight, now I can say that I have had a 28.