It’s probably declasse to admit this, but I’m drinking a Blue Moon as I listen to Aretha Franklin’s RESPECT.  UJ was here, we ate some pizza, and now I am enjoying a chilled adult beverage and, perhaps, the greatest voice in the history of American popular music.

What, exactly, is wheat beer, and why didn’t it seemingly exist 20 years ago?  Why does it have a fresh, clean, almost fruity taste that is such a nice contrast to a Budweiser?  And, much more importantly, how did Aretha Franklin dig so deep and find the voice that you hear in RESPECT?   It is awesome.

And, as even more of a testament to the fast-moving modern culture, how did wheat beer go from being newly discovered to being the purported beer of a poser so quickly?  It is one of life’s great mysteries.

I don’t care.  As Saturday night percolates, I still like the taste of Blue Moon Ale.

Hoggy’s Barn and Grille has closed.  For years it’s been a mainstay of the neighborhood, holding down the corner of Route 62 and Morse Road on the Gahanna-New Albany border.  Now the restaurant is shuttered.

It’s always sad when a neighborhood joint goes down the tubes — particularly one that’s been operating for years.  We’ve been to Hoggy’s dozens of times, eating family dinners, chowing down on pulled pork and ribs and beef brisket, enjoying the mashed spuds with the skin on and macaroni and cheese and moist cornbread, washed down with a good beer or two.  We’ve had some laughs and good meals and dared members of our family to take a shot at the “Hoggy’s Challenge” eating contest.  I don’t think anyone ever did.

After the kids went away to college, Kish and I stopped going to Hoggy’s; it just wasn’t the same.  Apparently other people stopped going, too, because Hoggy’s parent company has gone into receivership, and the receiver has said that the restaurants were dogged by poor sales.  The big white barn at the corner of Route 62 and Morse is now closed, and who knows when — or even if — it will ever open again.

It was raining yesterday morning when the old boring guy took us for a walk.  I mean, really raining.  The kind of rain that soaks through your fur and bounces off the ground, too.  Kasey and I looked outside and didn’t want to go.  But the old boring guy tugged and tugged, and off we went.

I thought maybe the old boring guy didn’t notice it was raining, so I stopped cold.  That made the old boring guy notice, because he almost fell down.  He got mad and pulled me forward.  I walked a ways, then stopped again.  Ha, ha!  He can make me walk in rain, but I don’t have to like it.

Then Kasey got into the act.  While the old boring guy was bending over to pick up poop — why does he do that, anyway? — she ran behind him and tied him up.  He had to drop this thing he was carrying to keep the rain off.  He got all wet, and that made him even madder. At least he knew it was raining.

But even though the old boring guy knew it was raining, he made us keep walking.  When I finally got home, I was covered in water and mud.  It was no fun, and then the old boring guy had to clean me off — which also made him mad.

Hey, old boring guy!  Kasey and I think if you don’t want to get mad, you shouldn’t walk us in the rain!

When we were in our 20s, we were in the wedding zone.  Every month or so, it seemed, Kish and I would be off to a “wedding weekend,” attending the nuptials of friends and family members.

Now we seem to have entered the funeral zone.  Rather than the great joy of weddings, we’re experiencing the emptiness and sadness of loss. 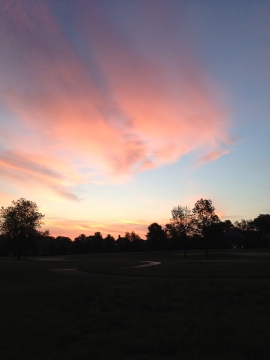 The prevalence of funerals seems surprising, but it shouldn’t be.  According to American morbidity statistics, death rates multiply significantly when people enter their 50s.  Suddenly more of our rock-like, long-time friends are dying.  It’s jarring, and unsettling.  And when you add the increased death rates of our generation to the expected funerals of older family members and acquaintances, it seems like much more time is spent putting on the gray suit and dark tie and going to funerals and calling hours.

I’m a strong believer in going to calling hours.  Although I always feel sorry for the family of the departed, as they try to deal with their grief while standing for long periods greeting visitors, I think it is important to show up and give the family a tangible sign of how important the departed was to friends and colleagues.  In our hurly-burly modern world, the fact that people have taken time from their busy days to stand in line in order to shake the hands of spouses, children, and siblings and murmur a few words of remembrance and consolation makes a huge statement.  I think the physical presence of people who want to pay their respects helps those who are wrestling with the awful loss to understand the real significance of their loved one.

So I will go, and stand in line, and think about the person who has gone beyond, and hug friends who also are there, and greet the widow and kids and try as best I can to convey what the departed meant to me.  I just wish there weren’t as many opportunities to do so these days.