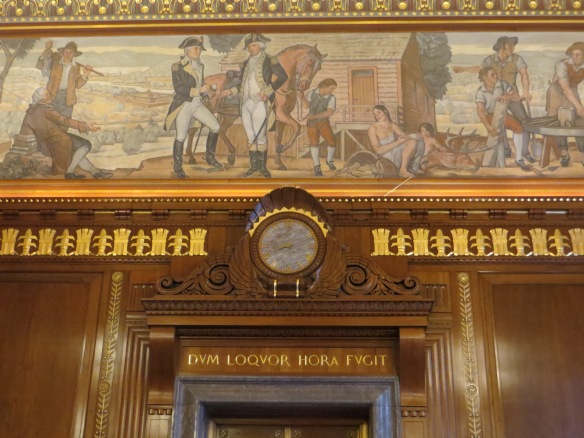 The Ohio Departments Building was built in 1933, during the depths of the Great Depression.  Many public buildings — typically referred to as WPA (for Works Progress Administration) buildings, whether they in fact were built by the WPA or by one of the other alphabet agencies of the New Deal — were constructed during that time period.  They all have a certain charm and beauty that modern office buildings don’t even try to equal.

I don’t know if this is true about the Ohio Departments Building (later renamed the Ohio Judicial Center) where the Ohio Supreme Court now sits, but I’ve always thought that the WPA buildings were beautiful because countless masons, artists, woodworkers, and other skilled craftsmen were thrown out of work by the Great Depression and were eager to do just about anything that would bring them a paycheck.  Whether my theory is true or not, the Ohio Departments Building is a collection of excellent paintings, splendid wood work, detailed metal fabrication, and colorful tile creations that certainly look like they were the work of masters.  The rear doorway of the Ohio Supreme Court courtroom, shown above, brings many of those art forms together, with the lovely painting of a colonial scene, a fabulous carved wooden wooden clock about the doorway, and fine, gleaming, metal inlaid into the woodwork.  (The Latin phrase below the clock and above the doorway is dum loquor, hora fugit — roughly translated as “while I am speaking, time is fleeing.”  It’s a good reminder for loquacious lawyers.)

The outside of the building, with its clean, bright lines, includes some carved cats and the quasi-Egyptian figure shown below, as well as the customary tribute to the value of labor — a common feature in Depression-era buildings.

President Obama gives his State of the Union speech tonight.  The Washington Post is reporting that we won’t be hearing much about debt reduction.

In fact, the President believes that our goal should be to “stabilize” the debt, rather than actually reducing it.  In short, he’s just aiming to slow the incredibly rapid rise in our debt to a slower rate of increase.  Under the President’s approach, our debt would continue to grow — just at the same rate as the economy generally.

Moreover, the President says that, with the tax increases that took effect recently, we’re more than halfway toward the goal of debt stabilization.  Of course, such confident statements about progress toward “debt stabilization” are based upon long-term forecasts about how the economy will perform, how it will be affected by the tax increases, and other guesswork.  How accurate have the Administration’s economic predictions been over the past four years, and why should we believe them this time around?

It’s disappointing that President Obama thinks we should simply accept our huge existing debt and a scenario in which that debt continues to grow, and grow, and grow until the end of time.  He’s like the employee who sets minimal workplace goals — say, 50 percent attendance — to ensure he can ultimately say they were accomplished.  Actually cutting spending and achieving a balanced budget is hard work; reframing the objective to be “stabilization” of a debt that will continue forever sets a much easier target.  And perhaps the President believes that if he says it often enough, people will believe it really means something.

The problem, of course, is that more debt is more debt, and interest on the debt must be paid.  In 2012, the U.S. paid $220 billion in net interest on the debt.  As our “stabilized” debt grows, our interest payments will necessarily grow as well, and if investors begin to grow skittish about our mountain of debt and being to insist on higher interest payments (which is what has happened in Europe) the interest component of our budget will grow faster still.  Erskine Bowles, one of the chairs of the Simpson-Bowles Deficit Reduction Commission that made recommendations the President ignored, says our interest payments could reach $1 trillion annually by 2020.  That’s not just $1 trillion that could be used for other purposes — or that could remain in the pockets of taxpayers — it’s also simply not sustainable.

So, let the President wave the white flag on debt reduction and try to convince the credulous that “debt stabilization” will do the trick.  I’m not buying the snake oil.