The Sunday curse has finally been exorcised! 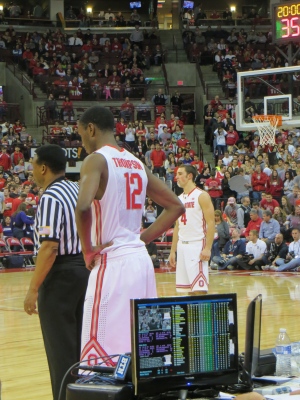 Today, the Buckeyes played a tough game in the second half.  After trailing by six at halftime, the Buckeyes reacted to a well-timed timeout by coach Thad Matta, ratcheted down on defense, and played a great second stanza.  Riding a career performance from Aaron Craft — who simply would not be denied on his drives to the hoop — the Buckeyes topped no. 4 Michigan State, 68-60.  Evan Ravenel, Sam Thompson, Deshaun Thomas, and Amir Williams played very well.  Buckeyes fans can hope that this team is starting to find its heart.

The win gives the Buckeyes 20 wins for the year, and also means that they will have a winning record in the very tough Big Ten.  There’s still a long way to go, but beating Michigan State is a huge win for Ohio State.  Great win, Buckeyes!  Now, keep it up!