This afternoon the basketball Buckeyes will play the Michigan State Spartans at the Schott.  I’ll watch it, but I’m kind of dreading it. 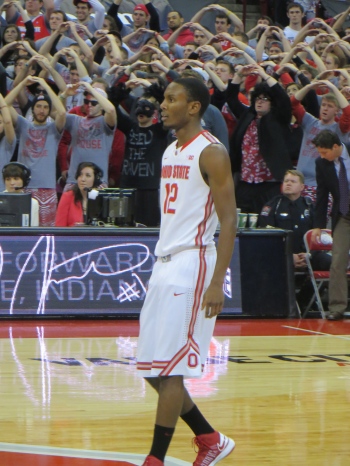 Lately, Sundays have not been kind to the Buckeyes.  Two Sundays ago, the number one-ranked Indiana Hoosiers came to the Schott and beat the Buckeyes soundly, 81-68.  Then, last Sunday, Ohio State got embarrassed in Madison by the Wisconsin Badgers, 71-49.  The Indiana game was bad enough, because losing on your home floor, even to the top-ranked team in the country, is always painful, but the loss to Wisconsin was especially disturbing.  In that game, the characteristic traits of a Thad Matta team — tough defense, hustle, grit, and a don’t quit attitude in the face of adversity — were wholly absent.  The Buckeyes didn’t show up and didn’t look like the same team we’d seen earlier in the season.

Fortunately, the college basketball season is long, and there are opportunities for redemption.  The Buckeyes bounced back with a win over Minnesota earlier this week, and now they face another huge challenge in Michigan State.  The Spartans are vying with Indiana for the Big Ten lead, and you know they will be crashing the boards like Tom Izzo-coached teams always do.  Led by excellent point guard Keith Appling, the Spartans have a deep lineup of hard-nosed and talented players.  Sam Thompson, above, and his teammates will need to play well to beat them, and they could use some help from the Buckeye Nut House fans, too.

But . . . it’s a Sunday game.  Let’s hope that, this Sunday, the Buckeyes don’t play like they think Sunday should be a day of rest.

1 thought on “Handling The Sunday Curse”