It’s March — the most unpredictable weather month of the year. 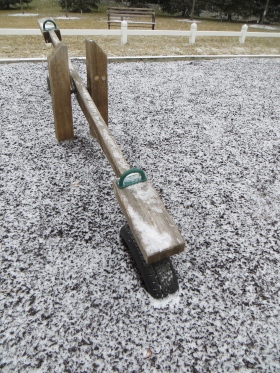 We’re all familiar with the old saying about March coming in like a lion and going out like a lamb, or vice versa.  But, which is it?  Sometimes the answer is not so clear.

Last night we had a discussion about whether, in central Ohio, March was coming in like a lion or a lamb.  The temperature was at freezing levels, with snowflakes blowing down.  I took the position that March had come in like a lion.  The alternative view was that 32 degrees and a little snow wasn’t that bad, and that you could only invoke the lion if the weather was abysmal — temperatures in the teens, raging blizzards, and so forth.  That seems like an awfully high leonine standard to me.  It’s just a lion, after all, not Godzilla or Darth Vader.

So, I’m going with the lion.  If March had come in like a lamb, it seems to me, there’d be kids on the seats of the teeter-totter at the neighborhood playground, not swirling snowflakes.