You wouldn’t think it to look at it now — with the gates firmly chained shut, the ground frozen hard, and everything snow-covered — but I’m anticipating being out on the old golf course before March is over.  Four Sundays from now, say, I’ll be walking out on green grass on a sunny morning, carrying my sticks for the first time since October and looking to shake the rust off my game.

The Ohio State Buckeyes aren’t playing this weekend.  After a grueling last few weeks in the Big Ten meat grinder, and some hard work in pulling out a win over Northwestern at Evanston, the Buckeyes are getting a well-deserved rest.

We fans, however, are pining for a weekend game.  I enjoy the adrenalin rush the games provide, and I rationalize that the spikes in my blood pressure caused by bad calls from referees during an OSU game probably are good for my system.  Every once in a while, you want to make sure that your body can withstand various stresses.  Isn’t that what those doctor-supervised stress tests are all about?  Getting seriously into a Buckeyes game is just the self-administered version.

Still, in a way it’s also nice to have the weekend off.  We get to see other teams play without having an enormous emotional investment in the outcome.  Today I’ll watch the Michigan-Michigan State game.  Whatever the result, it will help the Buckeyes in their quest for a higher seed in the Big Ten Tournament.  If Michigan loses, they drop below Ohio State in the loss column; if Michigan wins, Michigan State joins Ohio State and Michigan with five losses in the conference.

So today I’ll watch the games with a relaxed attitude.  I’ll be husbanding my emotional and stress-related resources for Tuesday night, when Ohio State travels to Bloomington for a make-or-break game against the top-ranked Hoosiers. 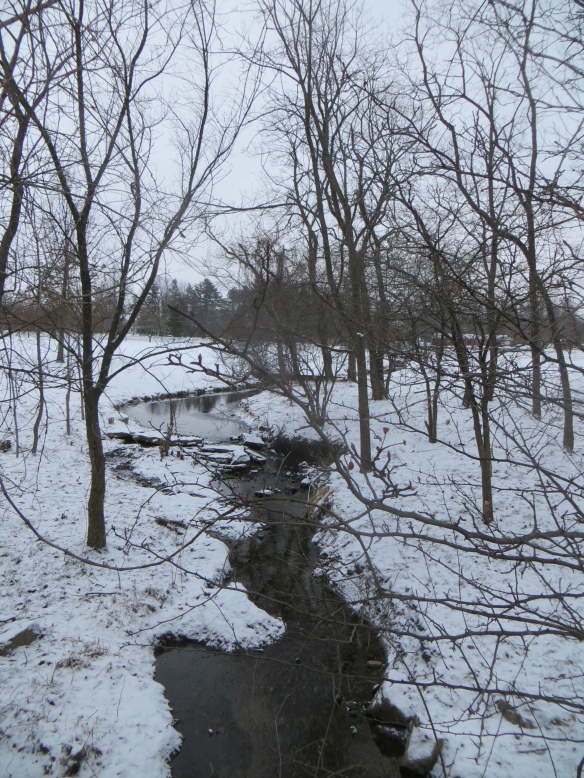 It was a black-and-white world on our walk this morning.  No glorious, warming, colorful sunrises today, just a white sky with snow drifting down, white snow-covered ground, and black trees, branches, and streams against the white background.  Here and there was a touch of gray, but mostly it was a cold world of stark contrasts, with no hint of the in-between.