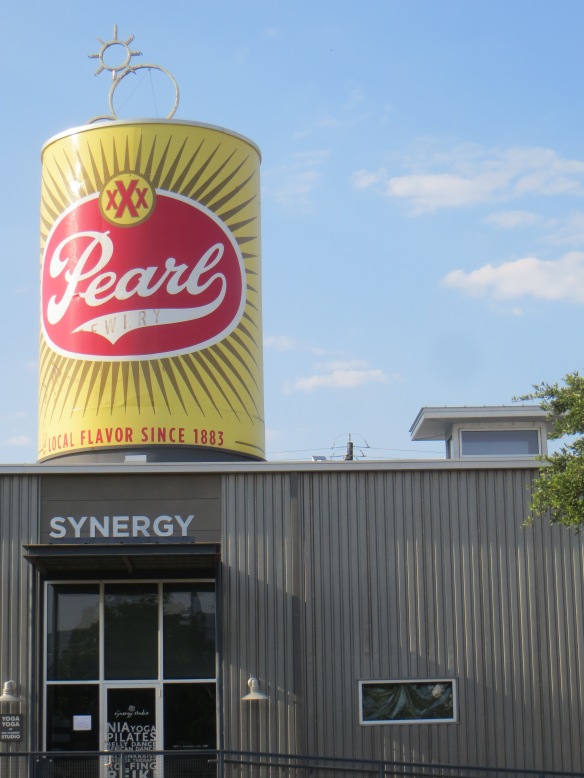 When UJ and I were kids, back in the early ’70s, we collected beer cans.  Beer was more regional then, and for the kid collector in the Midwest a can of Texas brew like Lone Star or Pearl was, well, a Pearl of great price.

Here in San Antonio, the old Pearl brewery grounds have been converted into a very nice mixed-use area, with condos and restaurants and shops.  Architecturally, it’s a hodge-podge of neat old buildings and new ones, and it’s worth a walk around to check out the different styles.  We ate dinner at an excellent restaurant called the Granary in the area and had a drink and an appetizer at the Culinary Institute of America facility in the complex.

You can find the Pearl brewery area by looking for the colossal can along the side of the highway coming in from the airport.  UJ and I would have been happy to have added it to our collection — if we’d had the room. 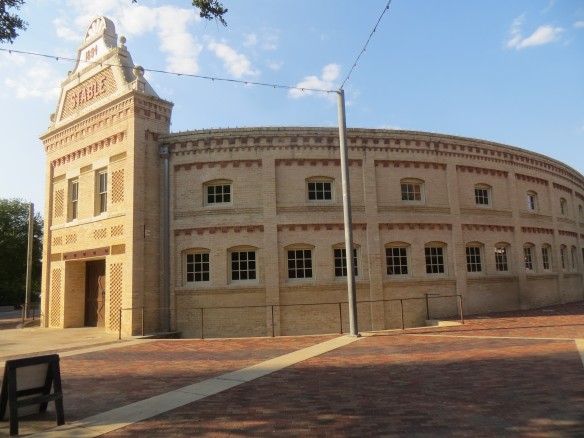 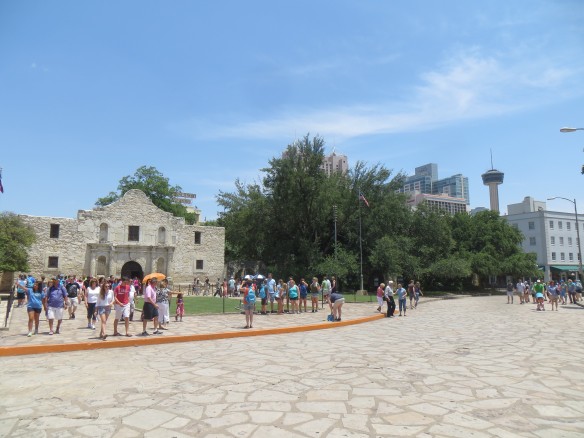 The Alamo story is, of course, one of the great legends of American history.  A hardy band of patriots holding out against the entire might of the Mexican army in a small mission on the dusty Texas plains.  Davy Crockett.  Jim Bowie.  William Travis.  Fighting to the last man until they were ultimately overwhelmed by vastly superior forces, dying heroic deaths in the name of Texas independence.  It’s why we Remember the Alamo.

So it’s weird to go to San Antonio and see the Alamo — because this iconic place, so associated with the barren Texas frontier, is smack dab in the middle of downtown, situated cheek-to-jowl next to high-rise hotels and office buildings.  There are itinerant preachers on the plaza right outside the front entrance, and a Ripley’s Believe it or Not and other trite tourist fare right across the street, where General Santa Anna’s army once marched.  It’s safe to say that Jim Bowie wouldn’t recognize the place.

And the Alamo is so . . . small.  It looks like the Alamo, but I was expecting something a lot bigger.  The building itself is tiny — which probably helps to explain why a small group could defend it.  Still, there was a long line of people waiting in the hot San Antonio sunshine to go inside for a look.  The lure of the Alamo legend remains strong, even if the actual place doesn’t quite fit the storyline. 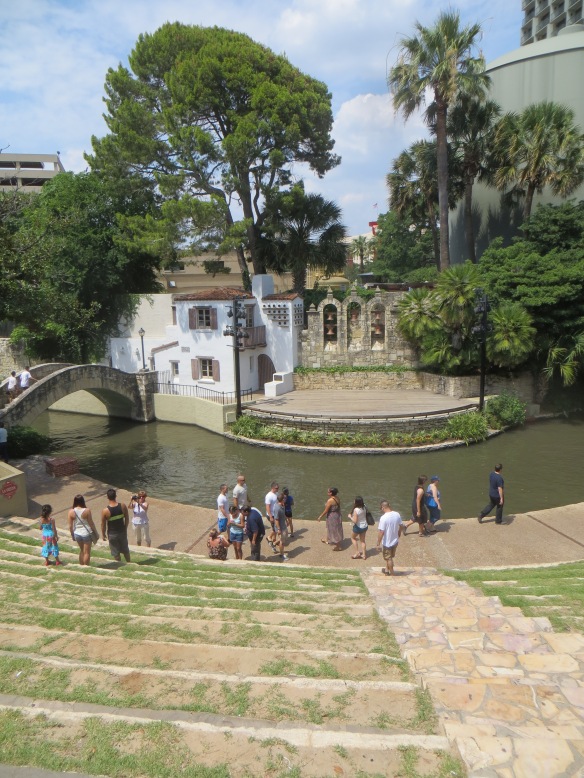 When you ask most people about San Antonio, they’ll probably mention the Alamo and the River Walk.  (The NBA fans among us would probably also mention the San Antonio Spurs, who fell just short this year in their bid for another NBA championship.)

I was one of those people who’d heard of the River Walk.  I figured it was something that was created in the ’60s or ’70s as one of those grand urban renewal projects, but the reality is much more interesting.  The River Walk in its modern form actually dates back to the 1930s, and as you walk along you will occasionally see signs about areas that were built by New Deal agencies like the Works Progress Administration.  There have been many other additions and modifications over the years. 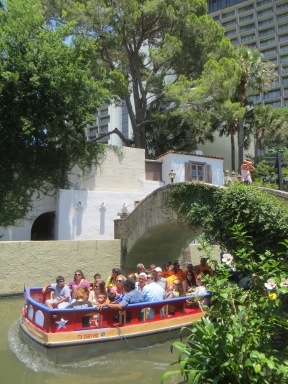 The River Walk obviously has been a great positive for San Antonio from an economic standpoint.  It’s a tourist attraction and is one of the reasons why San Antonio draws lots of convention traffic.  Many restaurants, bars, and shops are found there.  A number of people are employed as tourist boat operators, or landscapers, or in other jobs related to the River Walk.  It’s home to a number of sidewalk vendors selling their wares.

There’s lots to like about the River Walk.  In many American cities, planners seemed oddly eager to close off access to the rivers or lakes that caused the city to be founded in the first place.  If residents wanted to take a stroll by the river, they had to try to cross multiple highways or the parking lots of sports stadiums, and if they got to the water they found desolate, underdeveloped areas.  San Antonio, in contrast, embraced its river.  The wise city fathers here understood that people like walking by water and hearing the quack of a duck.  Now other waterfront cities are scrambling to catch up and correct city design mistakes that should never have been made in the first place. 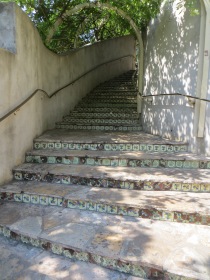 There are other nice aspects of the San Antonio River Walk, too.  It’s a place full of unique vistas.  Some areas are home to towering trees and welcome shade, others have a distinct Spanish feel.  There’s a lovely riverfront theater, with seats built into the hillside on one side of the river and the stage on the other.  The bridges spanning the river walk and the stairways leading up and down aren’t uniform, either, which adds to the charm.  And even on the hottest San Antonio summer day, it’s cooler down by the river.

During our visit here, we’ve walked on the River Walk every day, and it’s been crowded.  Richard says that San Antonio residents tend not to use it much because of the tourist crowds.  I can understand that, I suppose, but I applaud any urban plan that has “Walk” in it.  I have to believe that some people use the River Walk to get to work, and that the River Walk makes the downtown workers in San Antonio much more likely to walk somewhere for lunch than is the case in other cities.   In an era of too many red-faced, flabby Americans, any urban planning that also encourages walking and fitness is a good thing. 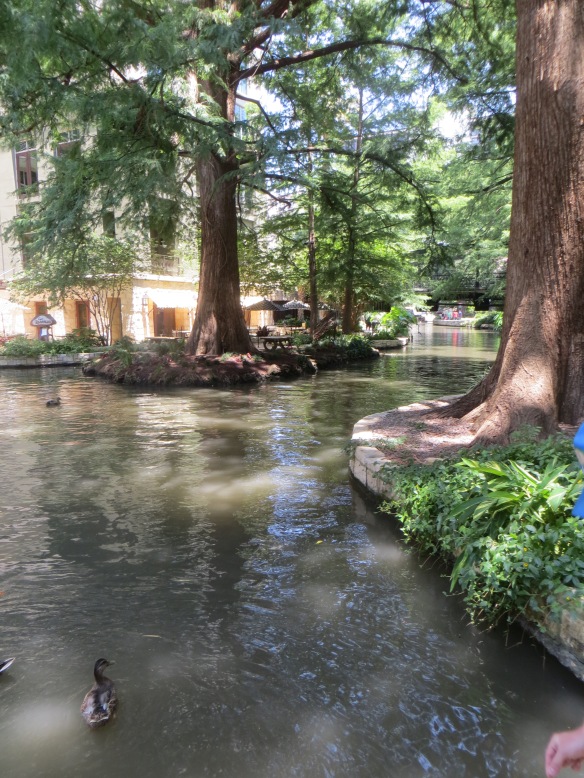