Ohio Stadium, also known as the Horseshoe, is one of the most famous football stadiums in the land.  But who built that cavernous concrete edifice on the banks of the Olentangy River — literally and figuratively? 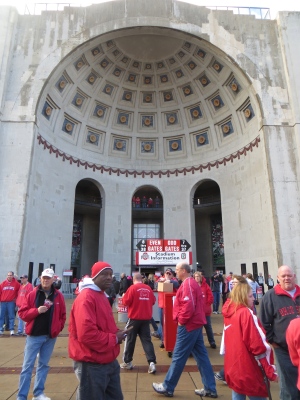 If you are a Buckeyes fan, you probably know the name of the figurative architect.  It’s Charles William “Chic” Harley, the great player who put Ohio State on the national gridiron map and started the quasi-religion that is Ohio State football.  Harley could run, pass, punt, and kick field goals and extra points, and he led Ohio State to its first undefeated season in 1916.  With Harley leading the way, Ohio State football became so popular that the Buckeyes outgrew their existing field and needed to look at a new — and much larger — home.

Which brings us to the literal architect, whose name was Howard Dwight Smith.  He not only designed Ohio Stadium, and won a gold medal for public building design from the American Institute of Architects in the process, he also oversaw the construction of St. John Arena and French Field House, which are other, well-known campus landmarks.

Want to learn more about these two legends of the Ohio State campus?  You can get ready for the Ohio State football season by signing up for a timely On the Road with Ohioana presentation on August 17.  The program will feature a tour of these and other campus landmarks, including the newly restored William Oxley Thompson Library, as well as remarks from OSU professor emeritus Raimond Goerler and Columbus Dispatch sportswriter Bob Hunter, the author of Chic and other books about Ohio State.  I’m pumped about the chance to learn a little bit more about my alma mater and my team and to support the Ohioana Library Association in the process.  If you’re interested in joining me, you can sign up here.  At only $35 for a four-hour tour and program, it’s a real Buckeye Bargain!

The neighborhood fire hydrants have just received a fresh coat of bright red paint, the recent deluges have left everyone’s grass as green as Ireland, and a child’s plastic wiffle ball bat in the background completes the primary color spectrum.

What to make of Edward Snowden, his leaks of intelligence information, and his curious relocation to the transit area of a Moscow airport, where he seems to be trapped in limbo like a character in a Kafkaesque play?

Virtually everyone I know who does not work directly for the Obama Administration has conflicting reactions about Snowden.  No one wants to see someone breach their agreement to maintain the secrecy of information, and I think most of us agree that the federal government needs to maintain certain secrets — particularly as it relates to international affairs.  Yet, I think most of us also appreciate the light that Mr. Snowden has shone on the sweeping domestic intelligence-gathering that has occurred, as a matter of course, in the Land of the Free.  We cringe when Snowden appears to be consorting with countries and groups that may be seeking to tap into his knowledge and to use his odd predicament to the disadvantage of America.  At the same time, some of us are troubled by the tactics the U.S. is using to try to restrain Snowden’s movements and, in fact, are openly rooting for him to make it to a place of asylum.

I’m as two-minded about Snowden as anyone else, and I think there is a reason for our ambiguous reactions:  we feel in our gut that there is a lot about this story that we don’t quite know yet, and internally we are reserving judgment until everything comes out.  How in the world did this young man get access to so much information that the federal government is now depicting as crucial intelligence and national security information?  What was his job, really?  And what kind of security gaps do we have if a random contract employee can tap into reservoirs of confidential data, leak it, and then skedaddle?  There’s also a lot to learn about what our government was doing, covertly, within our borders.  For those of us who have grown increasingly concerned about the government’s increasing footprint in our lives, Snowden’s leaks have provided some additional issues to ponder.

So, I’m going to follow this fascinating story as Snowden’s fugitive status gets finally determined, additional information gets released, and court cases and likely congressional hearings proceed — and I’m going to try to keep an open mind about what we learn.  I’m not quite ready to come down on one side or the other just yet.