Next Sunday, I’ll be up in Cleveland to watch the Browns play their first game of the season.  They’ll match up against the Miami Dolphins, and I’m expecting a Browns loss.  It’s not because the Dolphins are world-beaters — last year they were a mediocre 7-9 — but rather it’s because the Browns always lose their first game. 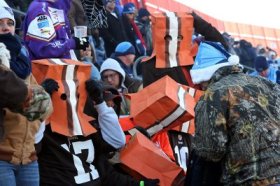 It’s astonishing, really.  Since the Browns have come back into the NFL in 1999, they’ve consistently flubbed their first game.  In those 14 years, their opening game record is 1-13.  They haven’t won their opener since the first term of the Bush Administration.  Betting that the Browns will somehow find a way to lose their first game is one of the safest bets in sports.  Other teams recognize this fact and relentlessly lobby NFL schedule-makers to let them play the Browns the first week in the season.  Last year, for example, the Browns offense was inept and the defense finally buckled and gave up the winning score against the awful Philadelphia Eagles. It put the team on the road to an 0-5 start and an early exit from playoff contention.

I’m not expecting a better result this year.  The Browns have no depth at running back and their offensive line seems incapable of effective run blocking.  You have to score to win, and that means the Browns are counting on QB Brandon Weedon to make plays.  Given Weedon’s iffy play last year, that approach doesn’t exactly inspire confidence.  The fact that the Browns just cut a bunch of players and picked up a slew of castoffs from the waiver wire also doesn’t say anything good about the team — although it might just mean their coaches and front office recognize the talent deficiency on the team.

I’ll enjoy watching the games with Russell this year but I’m not going to believe things have changed — unless the Browns somehow figure out how to win that first game.