A few days ago our kitchen faucet started leaking at the base when the water was turned on.  At first it was a trickle; eventually the leak became a gushing, fizzing torrent that we handled with a wadded-up towel. 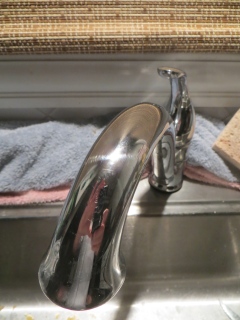 I’m not a practical, fix-it-yourself kind of guy.  I don’t know bupkis about plumbing, I don’t have the tools, and I don’t plan on learning the trade with blundering attempts on the most-used faucet in our house.  So, Kish called the plumber we’ve used before.  He’s happy to help us, but he told us we’d have to wait three weeks.

Three weeks!  Sorry, he said, but he’s got work scheduled for the next three weeks solid before he can fit us in.  And his jam-packed work schedule mirrors what we’ve heard from other craftsmen you need from time to time around the house.  We’ve got a sliding door that is misbehaving; the handyman we called said he’ll be out to take a look in a month.  We’ve learned that if you want to book painters, or carpenters, or brick masons, you really need to plan ahead.

The little lesson in all of this is that there is always going to be paying work for people who are good at skilled trades.  We’re always going to need plumbers, electricians, painters, and the other jack-of-all-trades fix-it guys.  Because our national policy for decades has been to try to push everyone toward getting a college degree, the influx of new tradesmen has dwindled, and now there’s apparently a shortage — which means you wait three weeks for a plumber.

I’m guessing that the plumber who can’t come out to take a look at our faucet for three weeks is doing pretty well in his business.  I wonder if the gaggle of unemployed law school graduates who are loaded down with student loan debt ever regret that they didn’t learn how to use a wrench?

1 thought on “Plumbers In Demand”