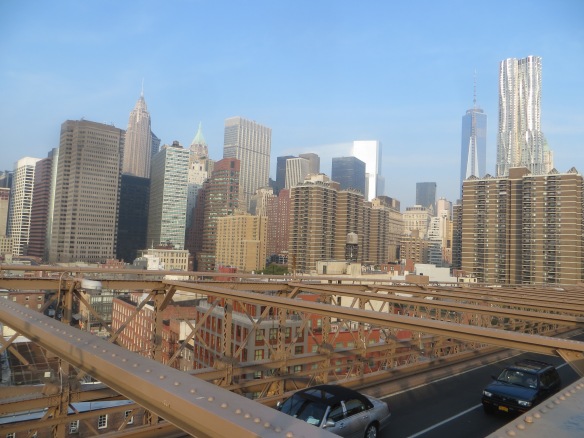 It’s another anniversary of 9/11, and it has been strange to be in the New York City area, just across the river from lower Manhattan and the site of so much carnage and chaos on that fateful day.  When we walked across the bridge this morning and saw the new One World Trade Center building rising above the skyline, it brought all the awful, painful memories back and gave me chills.

It hurts to remember, but we must never forget. 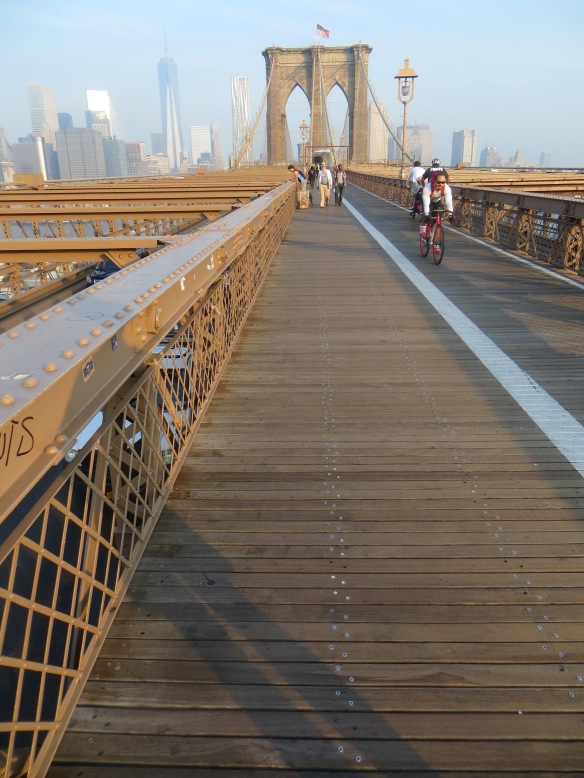 I like to walk in the morning.  If you happen to be in Brooklyn on a hot summer morning, what better way to satisfy your walking jones than to take a hike across the Brooklyn Bridge to lower Manhattan and back again?

This morning the Red Sox Fan and I ventured forth before it got too hot.  It’s a trek that measures more than 3.5 miles, round trip, and takes you right down the middle of the bridge, over the traffic and under the massive stone supports and suspension cables.  It’s a wooden walkway with two way bike and pedestrian traffic that’s a tight squeeze in spots, but well worth it.  We hoofed it over the bridge, stopped for a cup of coffee in City Hall Park on the Manhattan side, and then turned around and walked back to the Brooklyn side.

It was a pleasant stroll on a sunny morning over a national landmark.  Reality intruded, however, when we passed some construction workers involved in the bridge’s renovation and overheard them casually talking about how the “jumper” last week had somehow survived his plunge.  That’s New York City for you, I guess. 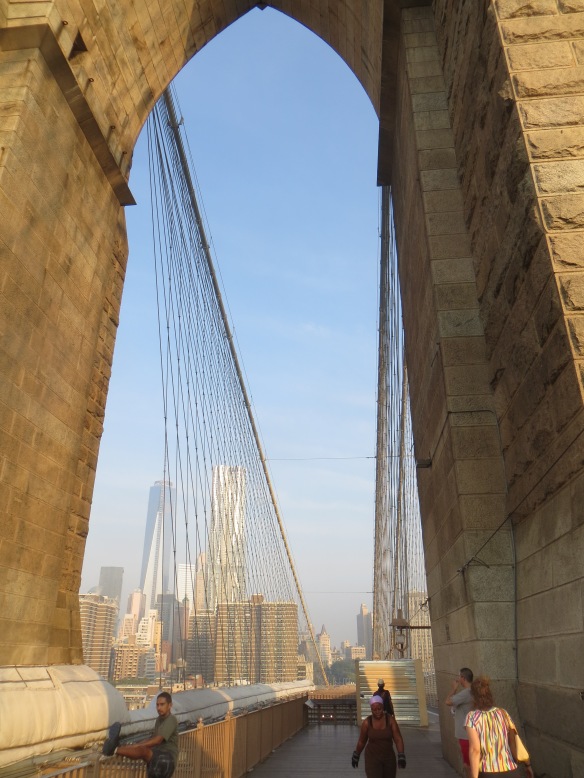 Here is some good news:  disgraced former Congressman Anthony Weiner limped home to finish fifth in the New York City Democratic mayoral primary, getting less than 5 percent of the vote.

Why is it good news?  Because it not only shows that voters have good judgment, it hows that maybe — just maybe — we’ve gotten past the point where politicians and sports figures and celebrities are immediately forgiven by the American people simply because they appear in public and express regret for their appalling actions. 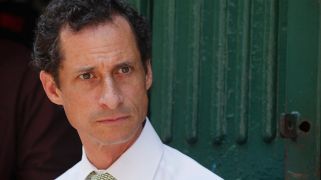 Weiner was repeatedly confronted by disgusted voters during his campaign, he was forced to admit that he had continued his misconduct even after he resigned from Congress, and he sank like a stone in the polls.  He was (or should be, at least) further embarrassed by his ill-advised reentry into politics and held accountable for his bad behavior, his previous lies, and his stunning willingness to expose his wife to even more humiliation.  (And, to top things off, another disgraced New York politician, Elliot Spitzer, also lost in his attempt to get back into politics.)

Some people may think these comments are unfair piling on a man who is down, and we should forgive and forget.  I understand that perspective, but I am fed up with people who abuse the public trust and then trade on their misconduct to achieve heightened fame and fortune and end up making jokes about their prior misdeeds on late-night talk shows.  I hope no network offers Weiner a “news” program in hopes that his notorious status will attract viewers.  I hope Saturday Night Live doesn’t recruit him to host a show.  I hope no reputable publisher will print a sugar-coated confessional.

I’m perfectly content to let Anthony Weiner live his life — but he should do so out of the public eye, without constantly looking to benefit from his past errors.