I ripped the Browns and their management earlier this week when they traded Trent Richardson, accusing them of giving up on the season and disrespecting their diehard fans.  So it’s only fitting that the Browns somehow figured out a way to score 31 points today and beat the Minnesota Vikings on the road, 31-27. 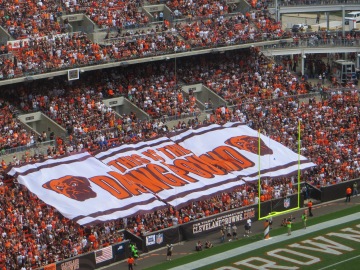 Let’s not kid ourselves — Minnesota isn’t very good, and the Browns aren’t either.  But I am amazed that this Browns team could figure out a way to score 31 points against any NFL team.  Of course, they frittered away lots of opportunities and had incredibly ill-timed turnovers, but this was the first time a lot of these guys had ever played together.  How in the world did they manage to gain more than 400 yards on offense and win on the road?

This week Browns fans everywhere will be tantalized.  Brian Hoyer looked a lot more comfortable in this offense than Brandon Weeden — could Hoyer and his quick release be legitimate?  The Browns D held Adrian Peterson below 100 yards, forced a fumble from him, and recorded six sacks.  Could the defense actually keep the Browns in games this year?

That’s the maddening thing about the Browns that only charter members of the Browns Backers can fully appreciate.  They usually don’t just stink up the joint — they always manage to raise your hopes before crushing them with an embarrassing loss or an impossibly inept play, and you look back on seasons and see countless losses that could have been wins and wonder about what might have been.  With today’s win, that process will start all over again.  Browns fans everywhere will see their hopes raised — at least until next week.

Ohio has had a concealed carry law for years.  More than 250,000 Ohioans have concealed carry permits, and the number of people applying for permits to carry firearms continues to rise.  The logical question is:  how has the law worked? 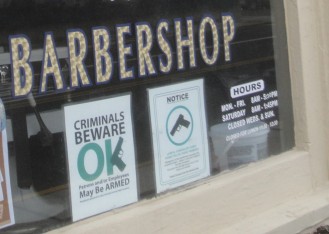 The answer to that question is surprisingly unclear.  It’s hard to find any studies about the effect of Ohio’s concealed carry laws on the commission of violent crimes.  If you simply look at crime statistics since 2004, when Ohio first passed a concealed carry law, the number of violent crimes increased during the first few years and then declined; in 2012 there were about 4,000 fewer violent crimes than in 2004.  But is there any cause-and-effect relationship between thousands of Ohioans walking around with guns and violent crimes?  Gun proponents believe the numbers are connected, but how do you determine whether a drop in crime is attributable to gun laws, or more effective police work, or increased use of security systems, or other ongoing efforts to combat crime?  Much of the debate seems to be based on anecdotal evidence of incidents where a person with a gun foiled a robbery or an abduction, and simple but-for causation arguments that reason that criminals must be thinking twice before committing crimes in the midst of an armed citizenry.

On the other hand, opponents of concealed carry raised public safety concerns about shootouts on public streets and innocent passersby being cut down in hails of bullets launched by quick-draw vigilantes.  After nearly 10 years, there doesn’t seem to be much evidence of that, either.  Ohioans who want to carry guns have gotten their training and their permits and seem to be complying with all legal requirements.  They’re apparently comforted by their ability to carry guns.  Some business owners even advertise that they’ve got a gun behind the counter, as shown in the above sign I saw last year in the front window of an establishment in Vermilion, Ohio.  If you believe that criminals will avoid confrontations with guns, why not advertise that you have one to maximize the likelihood of that anticipated effect — even if it might scare off a few skittish patrons?

Ohio’s concealed carry law was, and still is, a big political issue.  Isn’t it about time some neutral body did a study to try to determine how the statute has actually worked, and whether it has had the effects that proponents and opponents forecast?